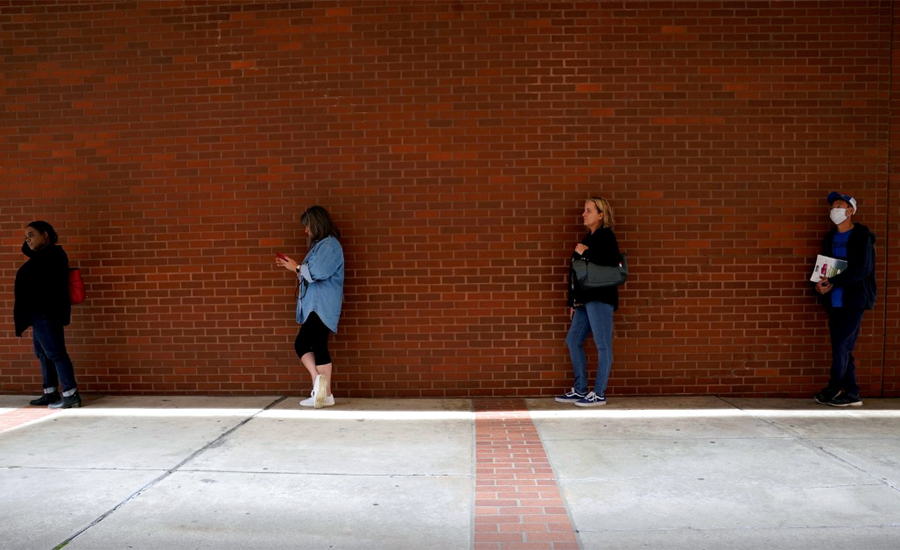 WASHINGTON (Reuters) – The number of Americans filing new claims for unemployment benefits unexpectedly rose last week, but the labor market is regaining its footing as an acceleration in the pace of vaccinations leads to more businesses reopening.

The improving health situation, combined with extremely accommodative monetary and fiscal policy, is boosting manufacturing, putting the economy on course for its fastest growth pace in 37 years this year. Factory activity in the mid-Atlantic region raced to its highest level in nearly 50 years in March, other data showed on Thursday.

“It is best to look through the weekly ups and downs of initial claims,” said Gus Faucher, chief economist at PNC Financial in Pittsburgh, Pennsylvania. “The labor market is set for a dramatic improvement through the rest of 2021.”

Initial claims for state unemployment benefits increased 45,000 to a seasonally adjusted 770,000 for the week ended March 13, from 725,000 in the prior week, the Labor Department said. Data for the prior week was revised to show 13,000 more applications received than previously reported.

Economists polled by Reuters had forecast 700,000 applications in the latest week. The four-week moving average of initial claims, considered a better measure of labor market trends as it irons out week-to-week volatility, fell 16,000 to 746,250 last week, a four-month low. This measure has been decreasing since February.

“The recent declines are consistent with the idea that claims are trending lower as the labor market recovers, aided by progress on virus containment, and we think that this recovery will continue over time,” said Daniel Silver, an economist at JPMorgan in New York.

Including a government-funded program for the self-employed, gig workers and others who do not qualify for the regular state programs, 1 million people filed claims last week. Claims continue to be distorted by backlogs and fraudulent filings.

Ohio, which has been plagued by fraud, accounted for 15.2% of claims last week. Claims shot up in Texas, likely reflecting backlogs following last month’s snowstorms.

Stocks on Wall Street were trading lower. The dollar gained versus a basket of currencies. U.S. Treasury yields were higher.

The United States had administered 113,037,627 doses of COVID-19 vaccines in the country as of Wednesday morning and distributed 147,590,615 doses, according to the US Centers for Disease Control and Prevention. The faster pace of inoculations should allow for broader economic re-engagement, even as the rate of decline in new coronavirus infections has leveled off.

In a separate report on Thursday, the Philadelphia Federal Reserve said its business conditions index surged to a reading of 51.8 this month, the highest since April 1973, from 23.1 in February. Measures of new orders and shipments at factories in the region that covers eastern Pennsylvania, southern New Jersey and Delaware also soared.

A gauge of factory employment hit its highest level since June 2018 and manufacturers increased hours for workers. But worker shortage is becoming a problem, with nearly two-thirds of manufacturers reporting this was an issue.

Nearly 45% said they had positions that had remained unfilled for more than three months, while 59% indicated skills mismatches between vacancies and available labor.

Manufacturers also planned to boost spending on capital projects in the next six months. The survey, however, likely exaggerates the manufacturing sector’s health. A global semiconductor shortage is undercutting production of motor vehicles, and bottlenecks in the supply chain remain a constraint for other manufacturing industries.

“The key theme for manufacturing this year is that growth is limited by capacity but not demand,” said Tim Quinlan, a senior economist at Wells Fargo Securities in Charlotte, North Carolina.

Still, strong manufacturing aligns with expectations that economic growth this year could be as high as 7%. That would be the strongest since 1984 and would follow a 3.5% contraction last year, the worst performance in 74 years.