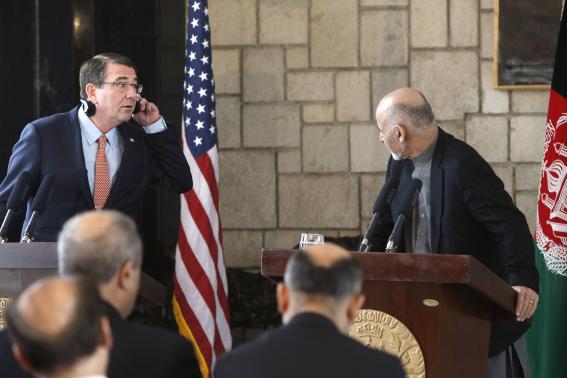 KABUL (Reuters) - The United States is considering slowing a planned withdrawal of US troops from Afghanistan to ensure that "progress sticks" after more than a decade of war, new Defence Secretary Ash Carter said during an unannounced visit to Kabul on Saturday. Under the current plan, the United States will halve the number of troops in Afghanistan to just over 5,000 this year, gradually winding down to a "normal" US embassy presence by the end of 2016. That schedule could now change, at least in part, suggested Carter on his first trip abroad since swearing in as the Pentagon chief on Tuesday, as the United States also rethinks the future of its counter-terrorism mission in Afghanistan. His remarks set the stage for talks next month when the Afghan president is expected in Washington. "Our priority now is to make sure this progress sticks," Carter said at a joint conference with President Ashraf Ghani, hours after landing in Kabul. "That is why President (Barack) Obama is considering a number of options to reinforce our support for President Ghani's security strategy, including possible changes to the timeline for our drawdown of US troops." Ghani said he expected to discuss US troop numbers with Obama "in the context of the larger partnership." US General John Campbell, who leads international forces in Afghanistan, suggested his focus for now was sustaining enough US trainers, advisors and counter-terrorism forces in Afghanistan during 2015 and 2016, not what happens later. "Right now I think we're comfortable looking at '15 and '16," Campbell told reporters traveling with Carter. The current strategy has drawn sharp criticism from Republicans in Congress, who say that hard-won gains made against the Taliban could be lost in much the same way that sectarian violence returned to Iraq after the US withdrawal. Afghanistan's national army and police suffered heavy losses last year, the bloodiest since the war against Taliban militants began in 2001. The emergence of a small number of militants in Afghanistan aligning themselves with Islamic State, which swept into northern Iraq last summer, has underscored anxieties about the dangers as foreign forces withdraw. Carter said Islamic State's presence in Afghanistan appeared "aspirational"." But he also acknowledged the future of the US counter-terrorism mission was also under review. "We are discussing and rethinking the details of the counter-terrorism mission and how the environment has changed here with respect to terrorism, since we first laid out our plans," Carter said. Discussions about the way forward in Afghanistan, Carter said, were possible thanks to political progress in Kabul, where Ghani's pro-Western unity government succeeded former president Hamid Karzai last year. Once the darling of the international community, Karzai made fervently anti-Western speeches in his later years in power and resisted US pressure to sign a crucial security treaty. Carter, who this week became Obama's fourth Defence secretary, is a former Pentagon No. 2 with deep roots in US policy on Afghanistan. He said Saturday marked his tenth official visit to the country, even though it was his first at the helm of the Department of Defense. Neither he nor Ghani made predictions about peace efforts with the Taliban, after senior Pakistani army, Afghan and diplomatic officials said the Afghan Taliban signaled they were willing to open peace talks. But Ghani sounded upbeat. "The grounds for peace have never been better in the last 36 years. Our approach is productive. We're hopeful," Ghani said. "But categorical answers in a peace process are dangerous."