US widens trade war with tariffs on European planes 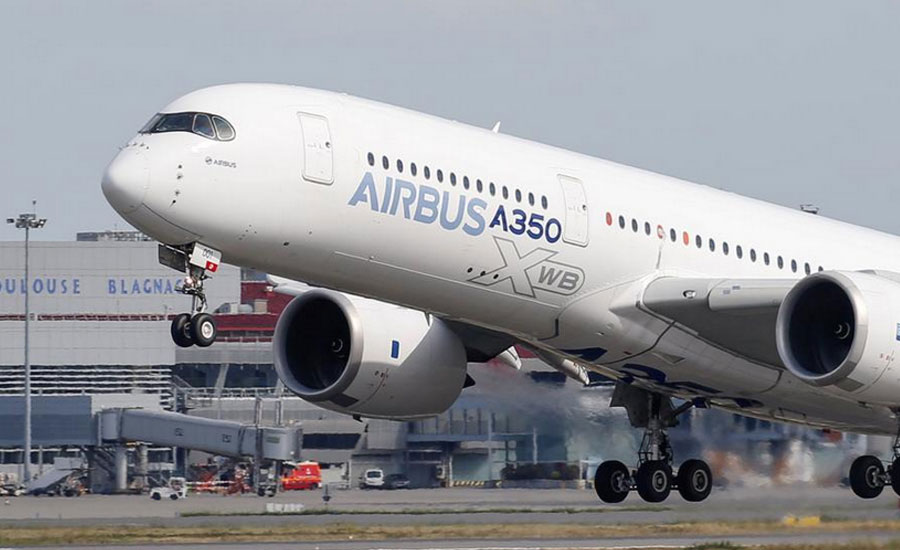 US widens trade war with tariffs on European planes

LONDON/BRUSSELS/WASHINGTON (Reuters) - The United States on Wednesday said it would slap 10% tariffs on European-made Airbus planes and 25 per cent  duties on French wine, Scotch and Irish whiskies, and cheese from across the continent as punishment for illegal EU aircraft subsidies. The announcement came after the World Trade Organization gave Washington a green light to impose tariffs on $7.5 billion (6.1 billion pounds) worth of EU goods annually in the long-running case, a move that threatens to ignite a tit-for-tat transatlantic trade war. The measures would follow tariffs levied by the United States and China on hundreds of billions of dollars of each other’s goods in their more than year-old trade war. The U.S. trade representative’s target list for EU tariffs, set to take effect on Oct. 18, includes large Airbus planes made in France, Britain, Germany and Spain - the four Airbus consortium countries. But no tariffs will be imposed on EU-made aircraft parts used in Airbus’ Alabama assembly operations or those used by rival US planemaker Boeing Co (BA.N), safeguarding US manufacturing jobs.
“Finally, after 15 years of litigation, the WTO has confirmed that the United States is entitled to impose countermeasures in response to the EU’s illegal subsidies,” U.S. Trade Representative Robert Lighthizer said in a statement. “We expect to enter into negotiations with the European Union aimed at resolving this issue in a way that will benefit American workers,” Lighthizer added. The tariffs heavily target the four Airbus consortium countries, including Spanish olives, British sweaters and woollens, and German tools and coffee, as well as British whisky and French wine. Cheese from nearly every EU country will be hit with the 25% tariffs, but Italian wine and olive oil were spared, along with European chocolate. The size and scope of the tariffs were reduced considerably from a $25 billion list floated by Washington earlier this year that included helicopters, major aircraft components, seafood, luxury goods and other big-ticket categories that were excluded from Wednesday’s announcement. One person familiar with the case said the USTR was deliberately not using the full extent of WTO-approved retaliation to coax the EU to the negotiating table. But it came with an explicit warning. “The US has the authority to increase the tariffs at any time, or change the products affected. USTR will continually re-evaluate these tariffs based on our discussions with the EU,” the USTR said.

The USTR has sought WTO ratification of its tariff list by Oct. 14. The duties could come into force just three days after a scheduled Oct. 15 tariff increase on $250 billion worth of Chinese goods, to 30% from 25%. As Washington and Beijing try to ease their bitter 15-month trade war, the US-EU trade spat looks set to worsen. Airbus spokesman Clay McConnell said the France-based planemaker was evaluating the list and its possible consequences in “close collaboration with the European Commission.” The WTO, he said, in coming months would grant the EU authority to impose tariffs on U.S. goods over its findings of illegal subsidies for Boeing from Washington state that could equal or exceed the U.S. tariffs. “Airbus considers that the only way to prevent the negative effects that these countermeasures would create will be for the US and EU to find a resolution to this long-running dispute through a negotiated settlement before the tariffs become effective,” he said.

In their decision, WTO arbitrators said Boeing had lost the equivalent of $7.5 billion a year in sales and disruption to deliveries of some of its largest aircraft because of cheap European government loans to Airbus. The decision, confirming a figure reported by Reuters last week, allows Washington to target the same value of EU goods but bars any retaliation against European financial services. At list prices from $92 million for an A319 jetliner to some $366.5 million for an A350-1000 widebody, the 10% Airbus tariff could impose severe financial burdens on US airline customers. Delta Air Linessaid it has about 170 Airbus planes on order that could be affected. “Aircraft are significant purchases requiring long-lead times for production - often years in advance,” Delta said in a statement. “Imposing tariffs on aircraft that US companies have already committed to will inflict serious harm on US airlines, the millions of Americans they employ and the travelling public.” Broad selling amid worries over slowing global growth that punished European stocks earlier on Wednesday accelerated as the ruling revived worries about damage to the already-ailing European economy. The pan European STOXX 600 index finished down 2.7%, its worst day since December 2018. Airbus shares closed down 2%. Wall Street’s main indexes suffered their sharpest one-day declines in nearly six weeks on Wednesday after employment and manufacturing data suggested the US-China trade war is taking an increasing toll on the US economy.

Airbus and Boeing, the world’s two largest planemakers, have waged a war of attrition over subsidies at the WTO since 2004 in a dispute that has tested the trade policeman’s influence and is expected to set the tone for competition from would-be rivals from China. The WTO had already found that both Airbus and Boeing received billions of dollars of illegal subsidies in the world’s largest corporate trade dispute. The global trade body is due to decide early next year on the level of annual tariffs the EU can impose on US imports. While the level of tariffs amounts to less than three days’ worth of trade between Europe and the United States, importers led by US airlines that buy Airbus jets have urged Washington to be selective when choosing industries to hit in order to avoid causing collateral damage to the US economy. EU manufacturers are already facing US tariffs on steel and aluminium and a threat from US President Donald Trump to penalise EU cars and car parts. The EU has in turn retaliated. The Trump administration believes tariffs were effective in bringing China to the negotiating table over trade and in convincing Japan to open its agricultural market to US products.