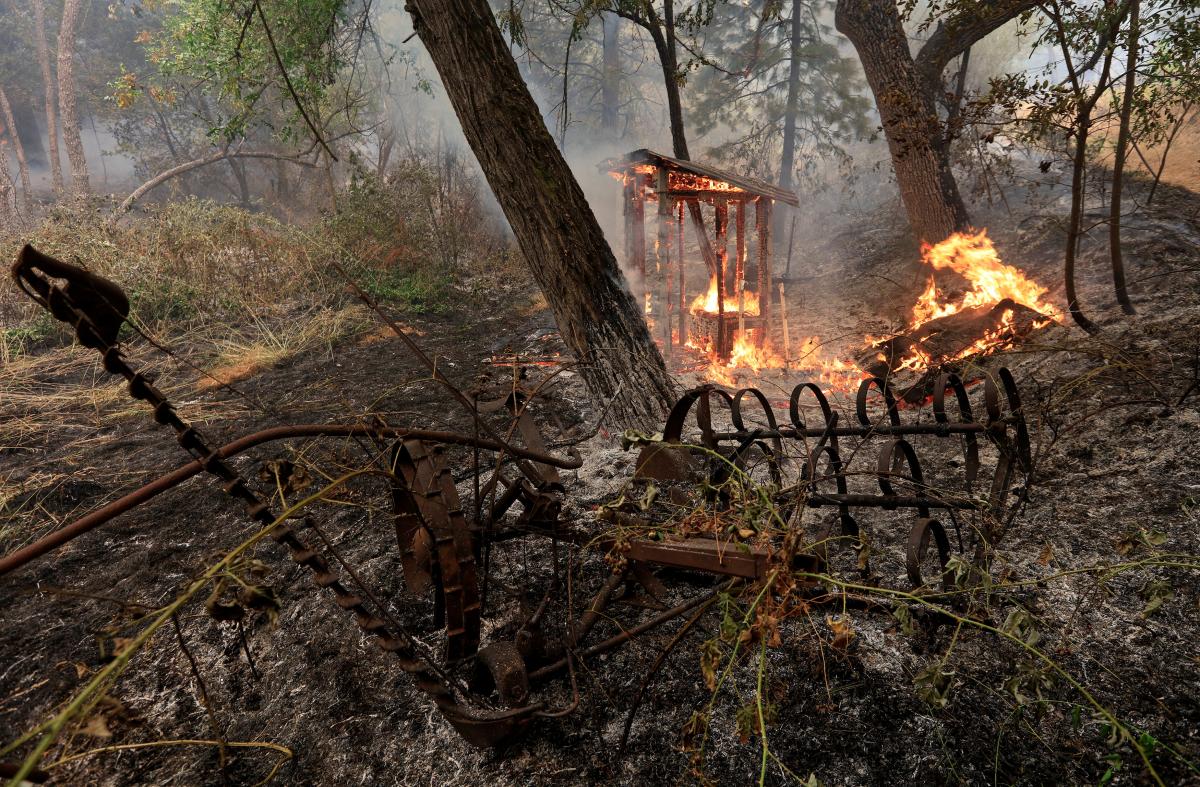 REDDING (Reuters) - A 70-year-old woman and her two great-grandchildren were among six killed when a wildfire raged through an area of northern California and engulfed entire communities, officials and family members said. Shasta County Sheriff Tom Bosenko told a news conference in the city of Redding at the edge of the blaze that one more person had died in a residence consumed by fire, bringing the total to six, including two firefighters. He said the latest victim had not complied with an evacuation order. Bosenko said authorities are still looking for seven people after finding nine others who had been reported missing. More than 38,000 people remained under evacuation orders in and around Redding, a city of 90,000 people about 160 miles (257 km) north of the state capital Sacramento. The Carr Fire, which has destroyed more than 500 buildings, is the deadliest and most destructive of nearly 90 wildfires burning from Texas to Oregon. The Carr Fire has charred 89,194 acres (36,095 hectares) of drought-parched vegetation since erupting last Monday. Redding Police Sergeant Todd Cogle confirmed that three bodies discovered at a fire-ravaged home on the outskirts of Redding were two children and their great-grandmother. The victims identified by relatives on Facebook and in news media reports were James Roberts, 5, his sister Emily, 4, and their great grandmother, Melody Bledsoe, 70. Bledsoe’s granddaughter, Amanda Woodley, said on Facebook the elderly woman desperately put a wet blanket over the children as their home burned. “Grandma did everything she could to save them she was hovered over them both with a wet blanket,” Woodley said in a Facebook post. The children’s mother, Sherry Bledsoe, was quoted by the Sacramento Bee as saying: “My kids are deceased. That’s all I can say.”

The weather is expected to offer no relief for firefighters, with temperatures over 100 Fahrenheit (37.7 Celsius), low humidity and gusty winds, the National Weather Service said. “We are simply not getting a break,” said Chris Anthony, a division chief with the California Department of Forestry and Fire Protection (Cal Fire). The blaze remained unpredictable, he said by telephone from Redding. “Under these conditions that we are seeing right now, it’s not going to take much for the fire to have the extreme spread that we saw a couple of days ago.” Officials battling the blaze told the news conference in Redding they were feeling more optimistic and starting to gain ground on Carr Fire. They pledged to return people to their homes as soon as possible. An army of some 3,500 firefighters and a squadron of 17 water-dropping helicopters had carved buffer lines around just 5 percent of the fire’s perimeter . President Donald Trump on Saturday declared the fire an emergency, authorizing federal funds for disaster relief efforts. Officials at the news conference said over 160 fire departments from California and around the country have been deployed to help quell the week-long blaze. At the height of its fury on Thursday night, the fire was whipped into a “fire tornado” by gale-force winds that drove flames across the Sacramento River into the western end of Redding, as thousands of residents fled for their lives in a chaotic evacuation. The nearby town of Keswick, with a population of about 450, was reduced to cinders. “We have seen really extremely explosive fire behavior on this particular fire, but its not unique any more to what we are seeing on fires in California,” Cal Fire’s Anthony said. “That is kind of that new normal that we are dealing with in California.” FIRE-RAVAGED HOME Bledsoe’s husband wept as he recalled trying to get back to the family’s house after he had left to run an errand on Thursday, only to learn that the fire was closing in on them. Ed Bledsoe told the Sacramento Bee that he spoke to the children on the phone as he raced in vain to return in time to save them. A Go Fund Me effort, launched overnight to help Ed Bledsoe, had raised almost half its $30,000 goal .It said the elderly couple had been caring for the great grandchildren for years in their rental home. So far this year, wildfires have scorched almost 4.3 million acres (1.7 million hectares) across the country, less than last year but still more than the 3.7 million-acre (1.5 million-hectare) average for the same period over the last decade. California has been particularly hard hit with several fierce blazes menacing large populated areas. The Carr Fire is among 17 major fires blazing in California with more than 200,000 acres burning, the National Park Service noted during a press conference. One of the California fires prompted a rare closure of much of Yosemite National Park last week, while another forced mass evacuations from the mountain resort community of Idyllwild, east of Los Angeles.