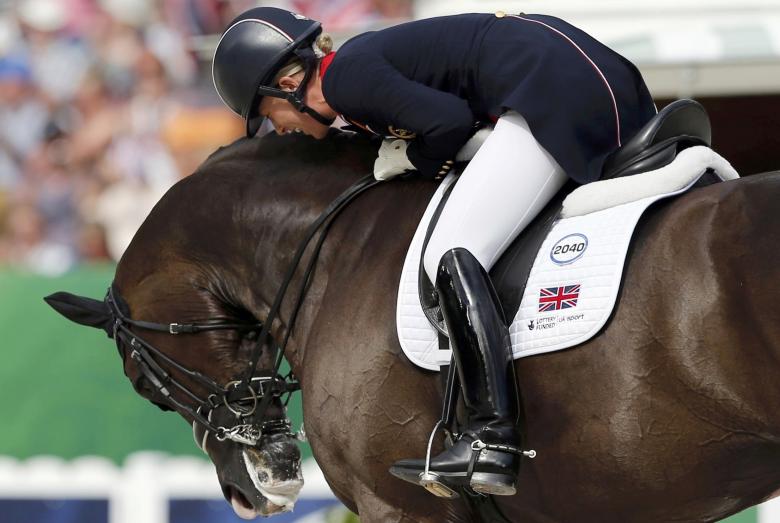 LONDON - Valegro, the 'dancing horse' who won three Olympic dressage gold medals and the heart of a nation with Britain's Charlotte Dujardin, headed into retirement in an emotional send-off. "I'm trying to keep it together," Dujardin, 31, told a sold-out crowd of around 10,000 at the London International Horse Show at Olympia as the words 'Thank You Valegro' were displayed on an overhead screen. "I wanted to retire him at the top of his game because he owes me absolutely nothing. And now we can take all the pressure off and just go around and really enjoy ourselves. And he deserves that." Together, the pair won individual and team golds on home soil in London 2012. In Rio last August, they again won individual gold as well as a team silver. While retiring from competition, the 14-year-old bay gelding will be kept busy with 'celebrity' appearances and occasional demonstrations while enjoying life cantering around the fields at home. Dujardin's career will continue with other horses, most notably the promising Mount St John Freestyle she is training up with the 2020 Toyko Olympics in mind. None will be like Valegro, however, the 'once in a lifetime' horse former Britain team captain Richard Davison described as the 'Muhammad Ali' of dressage, the greatest. Groom Alan Davies said the last few days had been an emotional roller-coaster, with all those associated with the horse feeling "the wave of emotion" building up from the public. "He is just the best," said Dujardin, who performed the freestyle routine that she rode in the same arena when they broke the grand prix world record with a score of 94.3 percent in 2014. "He is in every way the perfect horse ... he's just the most incredible horse and he has the biggest heart in the whole world. He always gives me his very best." Carl Hester, Valegro's co-owner and Dujardin's mentor as well as the winner of Wednesday's freestyle competition, said watching the pair compete -- starting at the bottom and working their way up -- had been "one of the best journeys of my life. "Quite simply, without this amazing horse here we wouldn't be where we are today." -Reutuers