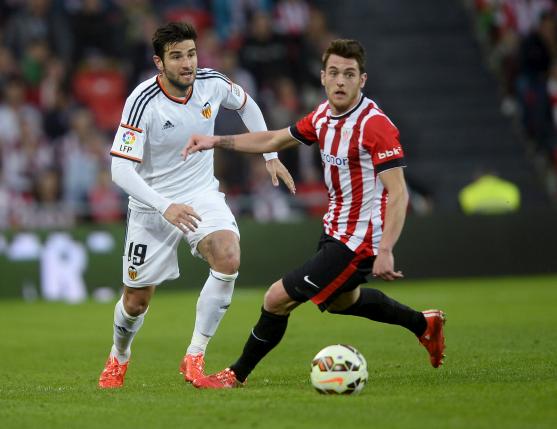 MADRID - Valencia stumbled in the battle with Atletico Madrid and Sevilla for third place in La Liga when they conceded a late Aritz Aduriz equaliser in a bad-tempered 1-1 draw at Athletic Bilbao on Thursday. The three clubs are battling it out for both third place and a lucrative automatic berth in the Champions League group stage and fourth, which carries a spot in qualifying for Europe's elite club competition. With eight games left, Atletico are third on 65 points after they won 2-0 at home to Real Sociedad on Tuesday, three ahead of Valencia in fourth. Sevilla, 2-1 winners at Levante on Tuesday, are fifth on 61 points. Barcelona, chasing a fifth title in seven years, lead on 74 points, four ahead of second-placed Real Madrid. Bilbao, who are through to next month's King's Cup final to play Barca, came close to an opener in the 56th minute at the San Mames when an Aduriz header was cleared off the line by Valencia defender Nicolas Otamendi. Substitute Rodrigo De Paul fired Valencia ahead five minutes later when Paco Alcacer cleverly let the ball run past him and De Paul clipped a shot past Gorka Iraizoz into the corner of the home goal. Otamendi was shown a straight red card six minutes from time for a dangerous tackle on Mikel San Jose which prompted an unseemly bout of pushing and shoving between the two sides that delayed play for several minutes. Bilbao made the extra man count and Aduriz pounced on a loose ball in the 90th minute to rescue a point for the Basque club, who have recovered well from a poor start to the campaign and are eighth on 40 points. Aduriz appeared to be in an offside position and Valencia coach Nuno expressed his anger with the match officials at his post-match news conference. "There were two results, the one which should have been, which was our victory, and the draw," the Portuguese told a news conference. "We are outraged and it's a disgrace," he added. "If there is anyone who wants to prevent Valencia from achieving its goals they are out of line. Because the outrage we feel will make us stronger." Villarreal, who are sixth, remain well placed to secure a place in the Europa League despite a 3-0 defeat at ninth-placed Espanyol, while Getafe pulled away from the relegation places with a 1-0 win at fellow strugglers Elche. - Reuters