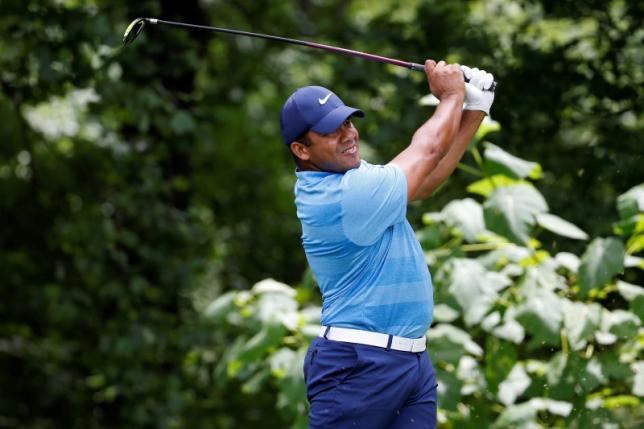 ALABAMA – Jhonattan Vegas of Venezuela capped a sensational six-hole stretch with an ace on his way to an 11-under-par 60 and a six-stroke halfway lead at the Barbasol Championship in Alabama on Friday. Vegas, who shared the overnight lead with two-times major winner Angel Cabrera of Argentina, started his second round at the 10th and played holes 12 through 17 in eight-under, including an eagle-three at the par-five 13th. He completed his hot stretch with a hole-in-one with a seven-iron from 190 yards at the par-three 17th. "It was just incredible, to the point where I almost thought I was sleeping," Vegas said about the dream series of holes. "Stretches like that, they're hard to imagine happening that often." As the elite field at the British Open were battling rain and high winds and scores were soaring at Royal Troon, the 31-year-old Vegas, ranked 240th in the world, tore up the RTJ Trail Golf Course in Opelika near Auburn University. He made the turn at eight-under 28 and despite a lone bogey on his second nine he closed with two more birdies for his 60, rolling in a 20-footer at his penultimate hole before coaxing home for 10-footer at the last for a 17-under 125 total. "This is a course you can go low if you’re striking it well," said Vegas, who will represent his country when golf returns to the Olympics in Rio next month. "I knew I was hitting the ball absolutely great ... So I just let myself go. It would have been great to shoot 59 but 60 is definitely a great round. American Hudson Swafford (63) was a distant second at 11-under. Cabrera carded 71 to fall 11 strokes behind. –Reuters