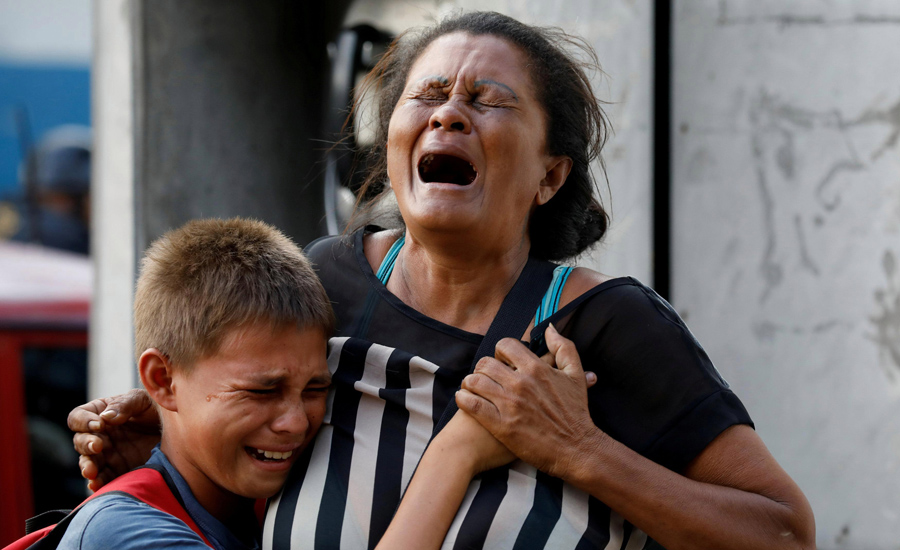 CARACAS (AFP) - A total of 68 people died on Wednesday during an attempted jailbreak in Venezuela after a fire engulfed police holding cells in one of the worst tragedies in years in a notoriously violent and overcrowded prison system.

Attorney General Tarek William Saab gave the death toll in the pre-dawn mayhem at the police headquarters in northern Carabobo state, blaming a fire thought to have been started deliberately.

Carlos Nieto, head of a prisoners' rights group called Una Ventana a la Libertad (A Window on Freedom), said that some prisoners burned to death and others choked after setting fire to mattresses and stealing a guard's gun in an attempt to break out.

The dead included two women who were visiting the jail, the attorney general said, adding that four prosecutors have been named to investigate.

Photos taken by Nieto's group showed the body of a man with burns and firefighters trying to put out flames.

Relatives of those being kept in the detention center tried to force their way in. After one officer was injured by a tossed stone, the crowd was dispersed by police firing tear gas.

A video posted on Twitter showed dozens of people demanding information in front of police guarding the site. Women were seen crying.

"I am a desperate mother. My son has been here a week. They have not given any information," Dora Blanco told local media.

Local news correspondents wrote on Twitter that the facility was tense Wednesday night.

Venezuela's prisons suffer from dire overcrowding and a shortage of basic supplies, struggling under the deepening economic crisis that is gripping the once-wealthy oil-producing country.

Because of the lack of space in penitentiaries, convicts are often sent to police holding cells like the ones in Carabobo, meant to be used as temporary pens for suspects facing charges or court hearings, where detainees are supposed to spend a maximum of 48 hours.

Nieto's association estimated that the temporary detention centers were overfilled by five times their capacity.

And what happened Wednesday in Carabobo is not an isolated incident, he added.

"All the police stations in Venezuela are facing similar or worse conditions of overcrowding, lack of food and disease," he said.

The association said 65 people died last year in the holding cells due to violence, malnutrition or tuberculosis.

Two weeks ago, 58 detainees escaped holding cells on Margarita Island, a favored tourist spot, after punching a hole in their facility's wall. They were all soon recaptured.

In August 2017, a riot left 37 dead and 14 wounded in police cells in the southern state of Amazonas, while an April 2017 clash between rival gangs left 12 dead and 11 injured in the Puente Ayala prison in the eastern city of Barcelona.

A month before that, the remains of 14 people were found in a mass grave in the General Penitentiary of Venezuela, in San Juan de Los Morros in the country's center.