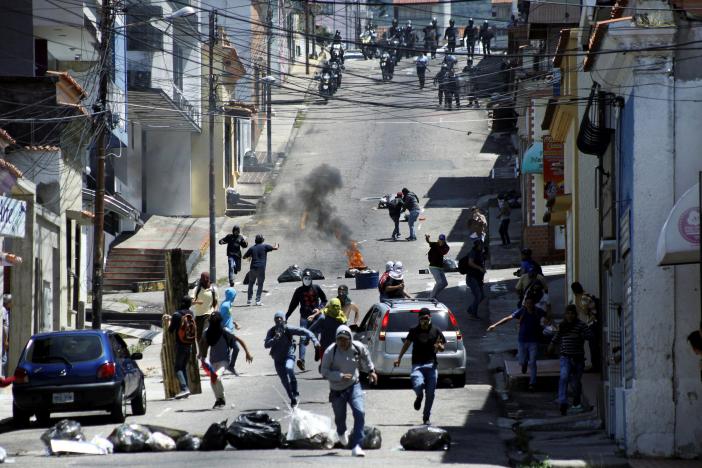 CARACAS/SAN CRISTOBAL, VENEZUELA – Venezuela's socialist government and the opposition on Monday announced talks for the weekend to deal with a political standoff that has intensified since the suspension of a referendum drive to remove President Nicolas Maduro.
The two sides will meet on Sunday on the Caribbean island of Margarita, mediated by the Vatican, regional bloc Unasur and three former international leaders. "At last we are installing a dialogue between the opposition and the legitimate government," Maduro said from Rome after a meeting with Pope Francis, who urged him to alleviate Venezuelans' suffering during a brutal economic crisis. Past conversations between the bitterly polarized sides have led to little progress. The opposition says the unpopular Maduro is an inept autocrat who must leave office before the crisis worsens. The former bus driver and union leader vows not to be pushed out by what he calls a power-hungry elite seeking a coup. Opposition coalition head Jesus Torrealba was cautious about the talks. "Dialogue cannot mean a government strategy to win time. ... It's a space to fight for a better country for all," he said after meeting a Vatican envoy in Caracas. News of the talks seemed to take some members of the opposition by surprise, potentially reawakening divisions within the diverse coalition and irritating activists who feel Maduro is not seriously committed to dialogue. Two-time presidential candidate Henrique Capriles said he found out about the talks on television. "No dialogue has begun in Venezuela," Capriles said on Monday night, adding he would attend if called on by the church. "These devils want to use the good faith of Pope Francis to buy more time." 'WE WANT FREEDOM!' The opposition is calling nationwide protests for Wednesday as Venezuela's third year of recession has left many skipping meals because of widespread food shortages and spiraling prices. Capriles said the protests would go ahead and would continue until the government "respects the constitution." No official agenda of the talks was announced, but the opposition is bound to bring up complaints about the quashing of its referendum bid to remove Maduro and the sidelining of the National Assembly, while the government will likely detail charges its foes are guilty of fraud, violence and coup plans. Among the mediators will be former Spanish Prime Minister José Luis Rodríguez Zapatero, former Dominican Republic President Leonel Fernández and former Panamanian President Martín Torrijos. During a protest on Monday, student leaders said 27 demonstrators were injured in clashes with security forces in the volatile border city of San Cristobal near Colombia. "We want freedom!" chanted the several hundred protesters, who barricaded roads with burning rubble. A hotbed of anti-Maduro sentiment, San Cristobal was the site of the worst violence during protests two years ago that led to 43 deaths around the nation. Students also held scattered protests in other places, including the capital, Caracas, but most were holding fire for Wednesday's rallies dubbed "The Takeover of Venezuela." –Reuters