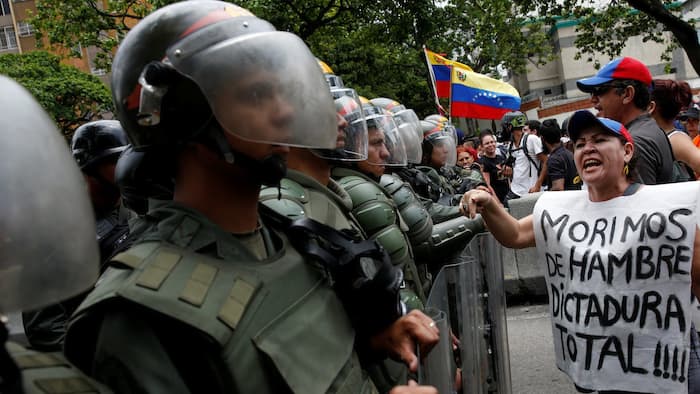 CARACAS - Venezuela's opposition was to hold nationwide rallies on Wednesday against unpopular socialist President Nicolas Maduro, whom they accuse of morphing into a dictator by preventing a plebiscite to remove him. The oil-rich South American country is in the throes of a crippling recession that has many poor families skipping meals or surviving on starches amid scarce food and triple-digit inflation. The opposition coalition says Maduro must go before the situation worsens, but Venezuela's electoral authorities last week cancelled a planned signature drive to hold a recall referendum against him, citing fraud. An outraged opposition said Maduro, a former bus driver and union leader, had crossed the line. It held a march led by women dressed in white on Saturday, launched a political trial against him in Congress on Tuesday, and was planning marches called the "Takeover of Venezuela" on Wednesday. "We're going to hit the street early with a clear and different message, because there's been a coup here," said opposition leader and two-time presidential candidate Henrique Capriles. "Venezuela is in a dangerous situation." With malaise rife in Venezuela's lines-filled streets, many fear that blocking an electoral solution to the crisis will fan social unrest. "THE REVOLUTION WILL CONTINUE!" Maduro, elected to replace late leader Hugo Chavez after his death three years ago, counters it is in fact the opposition vying for a coup beneath the veneer of peaceful protests. "Some want to see Venezuela full of violence and divided," a red-shirted Maduro told cheering supporters at a rally on Tuesday, where he vowed to stand firm. "They won't return! The revolution will continue!" he said, pumping his fist. Opposition protests two years ago led to 43 deaths, including security officials and both government and opposition supporters. As a result, some Venezuelans are wary of demonstrations or see them as futile. And Venezuela's poor have to prioritize the all-consuming task of finding affordable food, while many remain sceptical of the opposition, which has a reputation for elitism and whose internal squabbles have for years been a boon for "Chavismo." Still, the opposition estimates 1 million anti-government protesters flooded Caracas early last month in the biggest demonstration for over a decade. In an echo of September's demonstration, many stores in capital Caracas were set to remain shut while some parents planned to keep their kids at home on Wednesday. "We need change and we need to achieve it by taking to the streets to tell the government we're sick of so much misery," said Licis Perez, a 48-year-old beautician in Caracas. -Reuters