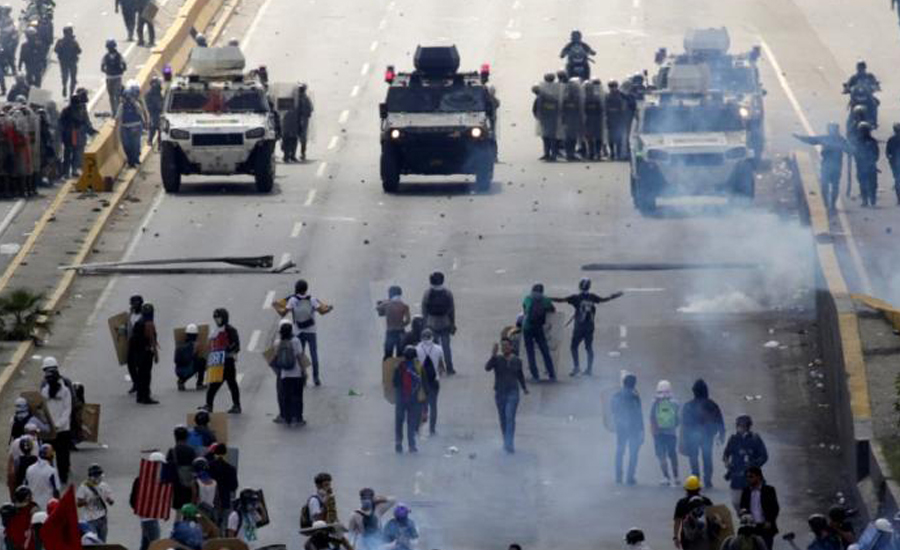 CARACAS - Young Venezuelan protesters lobbed bottles and bags of feces at soldiers who fought with tear gas to block the latest march in more than a month of nationwide protests against socialist President Nicolas Maduro.

The extraordinary scenes, in what was dubbed the "Shit March" on the main highway through Caracas, came as thousands of opposition supporters again poured onto the streets decrying Venezuela's economic crisis and demanding elections.

"These kids live in a dictatorship, they have no other option but to protest however they see fit," said Maria Montilla, 49, behind lines of youths with masks, slingshots and makeshift wooden shields.

Many carried stones and so-called "Poopootov cocktails" - feces stuffed into small glass bottles - that they threw when National Guard troops blocked their path, firing gas and turning water cannons on the crowds.

"There's nothing explosive here. It's our way of saying, 'Get lost Maduro, you're useless!'" said one young protester, who asked not to be named, between tossing bottles of feces.

The state prosecutor's office said 27-year-old Miguel Castillo was killed during Wednesday's protests in Caracas, without giving details. Motorbike taxi driver Anderson Dugarte, 32, died on Wednesday in the Andean city of Merida after being injured in a protest.

Interior Minister Nestor Reverol said in comments broadcast by state television that Dugarte was killed by a sniper linked to the opposition's Democratic Unity coalition. He said Castillo also was killed by a firearm.

At least 39 people have died in the unrest since early April, including protesters, government sympathizers, bystanders, and security forces. Hundreds have also been hurt and arrested.

Maduro says foes are seeking a coup with U.S. encouragement.

The opposition, which enjoys majority support after years in the shadow of the ruling Socialist Party, says authorities are denying a solution to Venezuela's crisis by thwarting a referendum, delaying local elections and refusing to bring forward the 2018 presidential vote.

They are seeking to vary tactics to keep momentum going and supporters energized.

The government accused the opposition of breaking international treaties on biological and chemical weapons by throwing feces.

Maduro is seeking to create a new super body called a "constituent assembly," with authority to rewrite the constitution and shake up public powers. Foes dismiss it as an attempt to keep the socialists in power by establishing a biased new assembly.

"They closed all the democratic doors, we warned how dangerous that would be for our country," said opposition leader Henrique Capriles, joining protesters on the highway.

Rights group Penal Forum says 1,991 people have been detained since April 1, with 653 still behind bars.

Opposition leaders have complained the government is processing 250 detainees via military courts.

The state prosecutor's office, which has in recent months, been dissenting from the government over judicial matters, said 14 prisoners accused of destroying a statue of Chavez in western Zulia state should be judged in civilian not military courts.

"They are not military officials, so it is wrong to judge them in that jurisdiction," it said, without mentioning other cases raised by the opposition.

Maduro, 54, a former bus driver and foreign minister under Chavez, and his allies appear to be hoping the opposition will run out of steam and are banking on a rise in oil prices to help assuage four years of recession.

They are seizing on vandalism by young opposition hotheads who burn rubbish in the streets and smash public property, to depict the whole movement as intent on violence.

The protests so far have failed to garner massive support from poorer, traditionally pro-Chavez sectors of Venezuela's 30 million people. But a bigger cross-section of society has been apparent at recent marches, some of which drew hundreds of thousands.

Looting has been breaking out in some cities, especially at night.

Chavez's former spy-master, Miguel Torres, has broken with Maduro's government, despite having served as interior minister and fighting against protests in 2014. He warned on Wednesday that the violence in Venezuela may be getting out of control. "What is happening may be the starting point for a huge armed confrontation between Venezuelans," he told Reuters. "Nobody wants that." -Reuters