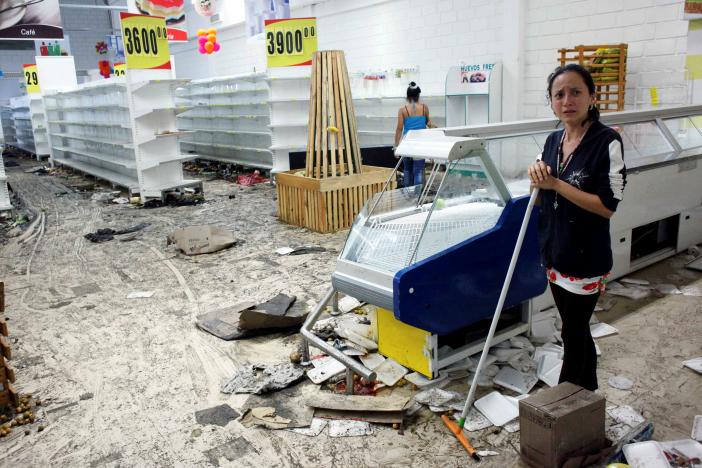 SAN CRISTOBAL - Venezuela said it was sending 2,000 soldiers to a border state that is a hotspot of anti-government radicalism after looting that killed a 15-year-old in the latest unrest roiling the nation.

Most shops and businesses in San Cristobal, capital of Tachira state on the Colombian border, were closed and guarded by soldiers on Wednesday, though looting continued in some poorer sectors, residents said.

People made off with items including coffee, diapers, and cooking oil in the OPEC nation where a brutal economic crisis has made basic foods and medicine disappear from shelves.

Barricades of trash, car tires, and sand littered the streets, as daily life broke down in the city that was also a hotspot during the 2014 wave of unrest against leftist President Nicolas Maduro.

Hundreds of thousands of people have come onto the streets across Venezuela since early April to demand elections, freedom for jailed activists, foreign aid and autonomy for the opposition-led legislature.

Maduro's government accuses them of seeking a violent coup and says many of the protesters are no more than "terrorists." State oil company PDVSA also blamed roadblocks for pockets of gasoline shortages in the country on Wednesday.

In Tachira, teenager Jose Francisco Guerrero was shot dead during the spate of looting, his relatives said.

"My mom sent my brother yesterday to buy flour for dinner and a little while later, we received a call saying he'd been injured by a bullet," said his sister Maria Contreras, waiting for his body to be brought to a San Cristobal morgue.

The state prosecutor's office confirmed his death, which pushed the death toll in six weeks of unrest to at least 43, equal to that of the 2014 protests.

With international pressure against Venezuela's government mounting, the United Nations Security Council turned its attention to the country's crisis for the first time on Wednesday.

"The intent of this briefing was to make sure everyone is aware of the situation ... we're not looking for Security Council action," US Ambassador to the United Nations Nikki Haley told reporters after the session.

"The international community needs to say, 'Respect the human rights of your people or this is going to go in the direction we've seen so many others go' ... We have been down this road with Syria, with North Korea, with South Sudan, with Burundi, with Burma."

"The US meddling stimulates the action of violent groups in Venezuela," he said, showing photos of vandalism and violence he said was caused by opposition supporters.

Venezuelans living abroad, many of whom fled the country's economic chaos, have in recent weeks accosted visiting state officials and their family members.

Maduro on Tuesday likened that harassment to the treatment of Jews during the Holocaust under the Nazis.

"We are the new Jews of the 21st century that Hitler pursued," Maduro said during the cabinet meeting. "We don't carry the yellow star of David ... we carry red hearts that are filled with desire to fight for human dignity. And we are going to defeat them, these 21st century Nazis."

Venezuela's main Jewish group, the Confederation of Israeli Associations in Venezuela, responded with a statement expressing its "absolute rejection" of "banal" comparisons with the Holocaust that killed six million Jews.

Social media has for weeks buzzed with videos of Venezuelan emigres in countries from Australia to the United States shouting insults at public officials and in some cases family members in public places.

Maduro's critics say it is outrageous for officials to spend money on foreign travel when people are struggling to obtain food and children are dying for lack of basic medicines.

But some opposition sympathizers say such mob-like harassment is the wrong way to confront the government.

As night fell on Wednesday, thousands of opposition supporters poured onto the streets of different cities for rallies and vigils in honour of the fatalities during protests.

Many carried flags and candles. "We've been in the street for more than 40 days because this government has broken every law, every human right, and we cannot bear it anymore," said one demonstrator, Eugenia, who asked that her last name not be used. "This rally is important because we have to retake the streets, we have been scared for too long," she added, referring to the rampant violent crime that normally stops people from going out after dark. -Reuters