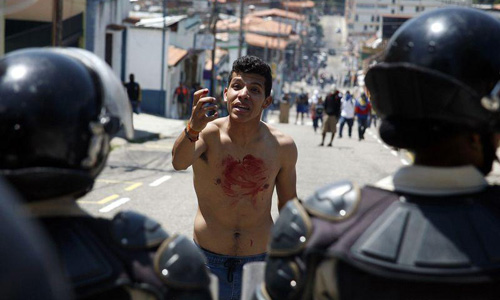 VENEZUELA (Reuters) - A teenager was fatally shot at an anti-government protest in the western city of San Cristobal on Tuesday, state officials said, exacerbating tensions in Venezuela amid an economic crisis and crackdown on the political opposition. A policeman was arrested after he confessed to shooting the student, identified as Kluiver Roa, 14, with a rubber-bullet shotgun during clashes with some 20 hooded protesters, officials said. With last year's violent protests and 43 deaths fresh in Venezuelans' minds, President Nicolas Maduro's socialist government condemned the killing and called for calm in the volatile state of Tachira near Colombia. Tachira's head of citizen security said Roa died in confusing circumstances during confrontations near the ruling party governor's home. "These hooded protesters intercepted four police officers, snatched their motorbikes and to get rid of the protesters, one of the officials shot at the ground," Colonel Ramon Cabezas told reporters. "When the protesters scattered ... we saw the students lifting the body of this youngster from beneath a car, we don't know for now how he got there." Police officer Javier Mora, 23, will be charged over the death in coming hours, the state prosecutor said. Roa had no vital signs by the time he arrived at the hospital. Local media reported that his father was a member of opposition party Copei. Other stone-throwing students were injured during the clashes, said student leader Reinaldo Manrique. Isolated clashes continued on Tuesday in San Cristobal, an epicentre of last year's massive street demonstrations. Contained protests had kicked off again in recent weeks in the city where shortages of basic goods ranging from toilet paper to medicines are particularly acute due to smuggling over the border. Last week's arrest of Caracas Mayor Antonio Ledezma, a veteran opposition leader, also sparked some protests, though nothing close to the massive rallies of 2014. Critics say an increasingly unpopular Maduro is seeking to distract supporters and spook opponents ahead of parliamentary elections this year. Maduro has countered that a Washington-backed opposition is plotting violence against his government. The opposition was incensed by Roa's death, saying it shows repression of protesters and augurs a broader crackdown. "There are no words to transmit my pain and indignation," said hardline opposition leader Maria Corina Machado. "They've killed a 14 year-old child. A kid protesting with his classmates." In an uncharacteristically strong statement, state ombudsman Tarek Saab condemned the death as a "vile assassination."