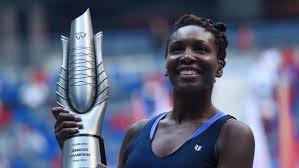 BEIJING – Venus Williams captured her 47th WTA career title on Saturday, and her biggest in five years, when she won the Wuhan Open in China, beating Wimbledon runner-up Garbine Muguruza. The 35-year-old American was leading Muguruza 6-3 3-0 when the Spaniard, struggling with injury, retired, handing the title to Williams, who was already well on top and had won the last five games in a row. A sympathetic Williams consoled Muguruza, one of the best young players in the game who had a tough semi-final with Germany's Angelique Kerber, during the victory presentation. "Congratulations Garbine for making the final," Williams said. "I know you had a tough match yesterday - it's not easy when you don't play your best, and I probably didn't have a chance if you felt well!" Muguruza traded blows with Williams through most of the first set but suddenly dropped her level of play after the seventh game. The 21-year-old lost the next five games on the trot before signalling she could not continue. "This is a sad day today," said Muguruza. "I'm very sorry I had to retire today, but I had a really amazing week here in Wuhan. "I really want to congratulate Venus. She's always such a tough player and she had an amazing week, as well. "For sure we'll play again soon, and it's going to be a tough match, of course." Currently ranked eighth in the world, Muguruza is projected to rise to a career-best fifth when the new rankings are released on Monday. Williams will climb from 24th to 14th after capturing her first WTA title since Auckland in January and her first Premier-5 level event since Dubai in five years. Williams chalked up her 700th career match win when she won her second round clash with Germany's Julia Goerges but had tough run to the final. She was pushed to three sets by British qualifier Johanna Konta in the quarter-finals 6-4, 3-6, 7-5 then saved a match point in her semi-final victory over Italy's Roberta Vinci. "It was a great week," Williams said. "To win the tournament and have the 700th...so, some great moments this week." –Reuters