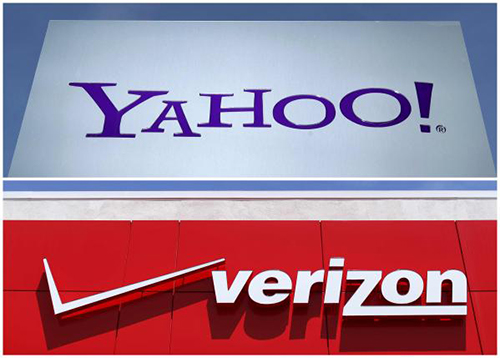 NEW YORK/SAN FRANCISCO – Verizon Communications Inc said on Monday it would buy Yahoo Inc's core internet properties for $4.83 billion in cash, marking the end of the line for a storied Web pioneer and setting the stage for a big new internet push by the telecom giant. Verizon (VZ.N) will combine Yahoo's (YHOO.O) search, email and messenger assets as well as advertising technology tools with its AOL unit, which it bought last year for $4.4 billion. Verizon has been looking to mobile video and advertising for new sources of revenue outside the oversaturated wireless market. The No. 1 US wireless operator is betting that it can take data on more than 200 million unique monthly visitors to Yahoo sites, many of them on mobile devices, and combine it with data on 150 million or so unique monthly AOL users and data on its own user base of over 100 million wireless subscribers to offer a more targeted service for advertisers. Barclays said last month Verizon could save $500 million a year in costs of acquiring internet traffic and other expenses by buying Yahoo's internet business. The deal likely means more investment in popular content sites such as AOL’s Huffington Post and Yahoo Finance when they become part of a much larger entity. “It now becomes somewhat easier to justify investing in content,” said Brian Wieser, an analyst at Pivotal Research. Verizon said it would provide more detail on the strategy behind the acquisition when it announces second-quarter earnings on Tuesday. LONG WAY DOWN The deal came after activist investors led by Starboard Value LP lost faith in Yahoo Chief Executive Officer Marissa Mayer, who was hired in 2012, and forced what became a protracted sale process. Yahoo, founded in 1994, was a dominant player in the early days of the internet, but has long lost its leadership position in internet search and advertising to Alphabet Inc's (GOOGL.O) Google, Facebook Inc (FB.O) and others. Mayer said on a conference call with investors that she planned to stay at Yahoo through the deal's close. Marni Walden, head of product innovation and new business at Verizon, will head the combined internet unit and said no decisions had yet been made on the management team. "Yahoo gives us scale that is what is most critical here," said Walden, adding that the company's audience will go from the millions to the billions. "We want to compete and that is the place we need to be." Mayer, in an interview with Reuters, said she still saw a "path to growth" for Yahoo, especially in mobile. "What's exciting about the Verizon transaction is that it brings us back to growth sooner," she said. She said she was "open-minded" about a possible role with the combined companies. But analysts expect AOL CEO Tim Armstrong - like Mayer a one-time Google executive - to be the driving force behind the combined companies. Yahoo is still one of the largest properties on the internet, with hundreds of millions of customers using its email, finance and sports offerings, among others, and a heavily trafficked home page.
But Google has a stranglehold on the internet search business and built an industry-leading email service, while Facebook dominates in mobile and social media. Meanwhile, traditional web banner advertising, long Yahoo's strength, has become much less lucrative in the age of mobile and video.
"It's a decade of mismanagement that has finally ended for Yahoo," said Recon Analytics analyst Roger Entner. "It's the continuation of an extension of Verizon's strategy toward becoming a wireless internet player and a move away from (telecom) regulation for Verizon into an unregulated growth industry. Under Armstrong, AOL has beefed up its advertising technology with a string of acquisitions, and launched the mobile video service go90. Verizon has not disclosed how financially successful the unit has been, but Armstrong, known as a formidable salesman, has clearly won the confidence of Verizon's leaders. FAR BEHIND GOOGLE, FACEBOOK The integration of Yahoo will not come without challenges. In its latest results, it reported a second-quarter net loss of $439.9 million as it wrote down the value of Tumblr, the microblogging and social media service it acquired in 2013 for $1.1 billion. Even with AOL and Yahoo, Verizon would still be far behind s Google and Facebook. According to eMarketer, Yahoo is expected to generate $2.32 billion in net U.S. digital ad sales, while AOL is expected to make $1.3 billion in 2016. Facebook and Google are forecast to deliver sales of $10.3 billion and $24.63 billion, respectively, by the end of this year. The Verizon deal would transform Yahoo into a holding company, with a 15 percent stake in Chinese e-commerce company Alibaba Group Holding Ltd (BABA.N) and a 35.5 percent interest in Yahoo Japan Corp (4689.T) as well as Yahoo's convertible notes, certain minority investments and its non-core patents. Yahoo executives said the remaining company is structured to "indefinitely" hold its Yahoo Japan and Alibaba stakes. They are worth about $40 billion based on their market capitalizations, while Yahoo had a market value of about $37.4 billion at Friday's close. Yahoo will continue as an independent company until the deal receives shareholder and regulatory approvals, the companies said. It is expected to close in early 2017. It plans to change its name and become a publicly traded investment company. Yahoo currently has $7.7 billion in cash, in addition to the $4.8 billion it will receive at the close of the deal, which it plans to return to shareholders, Yahoo executives said on the call. Verizon prevailed over rival bidders, including AT&T Inc (T.N); a group led by Quicken Loans founder Dan Gilbert and backed by billionaire Warren Buffett; private equity firm TPG Capital Management LP [TPG.UL]; and a consortium of buyout firms Vector Capital and Sycamore Partners. Under pressure from Starboard, Yahoo launched an auction of its core business in February after shelving plans to spin off its stake in Alibaba. –REUTERS