Verizon strike seen lowering US May payrolls by 35,000 jobs 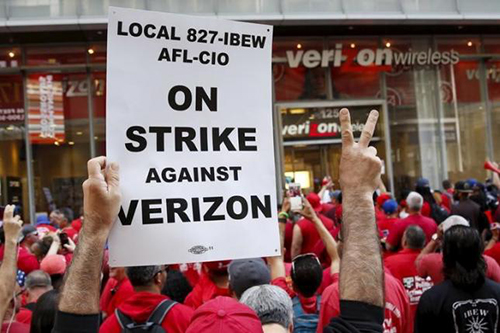 Verizon strike seen lowering US May payrolls by 35,000 jobs

NEW YORK – The strike by Verizon Communications Inc (VZ.N) workers will probably trim US non-farm payroll growth in May by at least 35,000 jobs, a Labor Department report showed on Friday. The department's monthly strike report showed 35,100 Verizon employees were idle during the survey period for the May payrolls count. Striking workers who do not receive a paycheck during the period are considered unemployed. The Verizon workers, including network technicians and customer service representatives in the company's Fios Internet, telephone and television services unit, walked off the job on April 13 in the largest US strike in recent years.
Labor Secretary Thomas Perez said on Friday that Verizon and unions representing the striking workers had reached a tentative deal. The Labor Department will publish its closely watched employment report for May on June 3. Economists polled by Reuters expect the data to show payrolls increased by 164,000 workers this month after rising 160,000 in April. The unemployment rate is seen steady at 5 percent. –REUTERS