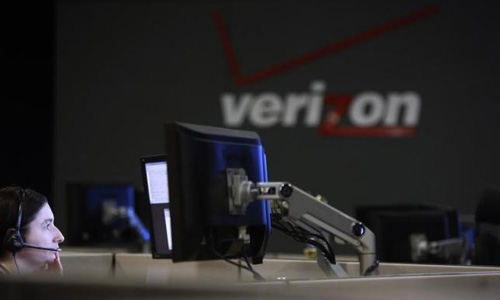 NEW YORK - Verizon Communications Inc may rely largely on advertising for revenue from its upcoming online video service, Chief Financial Officer Fran Shammo said in an interview. This could set the No. 1 US wireless carrier apart from rival online video services such as Dish Network Corp's Sling TV and Sony Corp's PlayStation Vue, which offer traditional TV content with ads and collect subscription fees. Original online programing on Verizon's service could use an "advertising-type" model, "not necessarily a consumer-pay model," Shammo said in the recent interview. Most Americans own a mobile phone, and Verizon is looking at online video delivery to increase data consumption on mobile devices and increase revenue. The digital video service, which it expects to release in mid-2015, is aimed at families and younger viewers who increasingly consume content on mobile devices. Earlier this month, Verizon announced a deal to add original online programing to its service from DreamWorks Animation and its AwesomenessTV unit that is known for creating popular content aimed at teens and younger adults known as millennials on Google Inc's YouTube. More content deals are in the works, Shammo said. Dish’s Sling TV is a $20-a-month online video streaming service. Sony's new PlayStation Vue Web offers more than 85 channels, starting at $50. Apple Inc is in talks with programmers to offer a slimmed-down bundle of about 25 channels, the Wall Street Journal reported this month. Verizon executives have said the company's "mobile-first" service will offer 20 to 30 channels and that they also see a market for streaming original content. As the company crafts a revenue model for its new service, it is also contemplating "pay-per-view" options for live streamed coverage of concerts and sporting events as technology evolves, Shammo said. Verizon has said it plans to use a technology called multicasting, which can be used to stream live video to multiple mobile devices through a single lane of airwaves. But mobile device makers have only recently begun installing chipsets that support this, executives have said. The service was developed by integrating Verizon's "OnCue" video streaming technology that the company purchased from Intel Corp in 2014 and its Digital Media Services technology, which formats content and splices in ads. - REUTERS