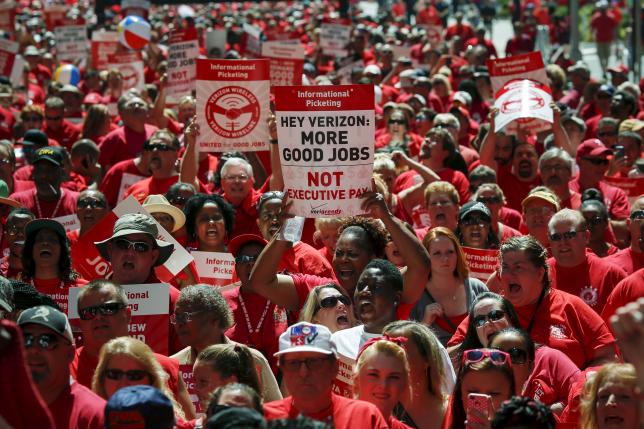 NEW YORK - Verizon Communications Inc and the unions representing its wireline unit employees on the U.S. East Coast said work will go on and talks continue after their current contract expired. Since June, the unions have been in talks with Verizon over the company's plans to cut costs by controlling healthcare and pension-related benefits over a three-year period. Last week, the Communications Workers of America (CWA) and International Brotherhood of Electrical Workers that represent over 37,000 wireline employees said they had voted to go on strike, if needed, after their contract expired on Aug. 1 at midnight. During the last round of contract negotiations in 2011, talks ended in a strike. The unions want extra benefits in addition to job security provisions. The CWA said on Saturday that Verizon has not budged from its original proposal which they have said would increase workers' healthcare costs by thousands of dollars, eliminate job security and remove any restrictions on the company's right to contract out or offshore union jobs. “Despite our best efforts, Verizon refuses to engage in serious bargaining towards a fair contract,” Dennis Trainor, Vice President for CWA District One, which represents Verizon workers in New Jersey, New York and Massachusetts, said. "We’re not going to take it, and we’re going to keep the fight going while we’re on the job.” Verizon presented the unions with a revised proposal on Saturday night that is on the table, the company said in a statement. “We are disappointed that after six weeks of good faith bargaining and a very strong effort by the company, we have been unable to reach new agreements with the unions,” Marc Reed, Verizon’s chief administrative officer, said in the statement. Verizon's wireline business includes FiOS Internet, telephone and TV services. The company said on Friday there had been little progress in the talks, and that it is ready in the event of a work stoppage. -Reuters