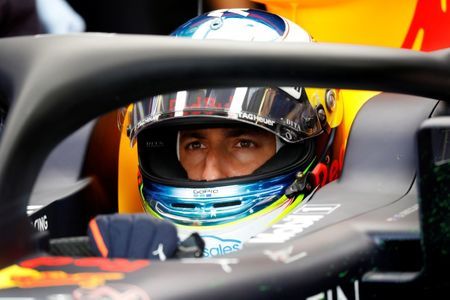 HOCKENHEIM, Germany (Reuters) - Max Verstappen kept Red Bull on top of the German Grand Prix practice timesheets, and Lewis Hamilton off them, after team mate Daniel Ricciardo was fastest in the first session . The 20-year-old Dutch driver set a quickest lap of one minute 13.085 in soaring afternoon track temperatures, with Formula One world champion Hamilton second and 0.026 slower for Mercedes. Hamilton had been four thousandths of a second off the pace in the morning when Ricciardo lapped in 1:13.525. “It was a nice surprise to start so competitively here but we have to remember .” said Verstappen. “The others will be quicker for qualifying.” Verstappen’s pace may concern Mercedes more than Ricciardo’s, with the Australian set to start from the back of the grid due to an accumulation of grid penalties, but he also lost time due to a small oil leak. Hamilton was happy with his day’s work as Hockenheim welcomed Formula One back after a year’s absence for what could be the last grand prix there for some time. “We’ve got through our programme today, finished all the sessions and got all the information we needed from the tyres,” the Briton said. “Both Ferrari and Red Bull were very quick today and I think it will be very similar tomorrow and on Sunday. “It’s going to be a serious challenge and it’s not an easy track to get right, so we will have to give it everything,” added the four-times champion. Weather forecasts predict rain on Saturday with dry conditions on race day.

Ricciardo’s penalties were tactical, to ensure he has the best possible chance in Hungary next week at a circuit that should be a better fit for the Red Bulls. “The priority today was to get a good race car as the reality is that qualifying will be irrelevant for me and we’re going to be passing a fair few cars on Sunday,” he said. Verstappen had been third fastest in the day’s uneventful opening session, with Ferrari’s championship leader Sebastian Vettel fourth in both. Vettel, who leads Hamilton by eight points halfway through the season, grew up in nearby Heppenheim and fell in love with the sport as a child when he watched Michael Schumacher race at Hockenheim. Valtteri Bottas, a new Mercedes contract announced an hour before practice started, was fifth and third in the respective sessions while Ferrari’s Kimi Raikkonen was sixth and fifth. Sauber’s Monegasque rookie Charles Leclerc, strongly tipped to replace 2007 world champion Raikkonen at Ferrari next year, was an impressive ninth and eighth in the two sessions. Italian test driver Antonio Giovinazzi drove for Sauber in the morning, before handing back to Sweden’s Marcus Ericsson who could manage only the 14th best time. Canadian reserve Nicholas Latifi also had a stint in the Force India that Frenchman Esteban Ocon will race. Williams and McLaren, two once-dominant former champions now struggling at the back of the pack, had another tough day. Belgian Stoffel Vandoorne was 20th and last in both sessions for McLaren, while Williams pair Lance Stroll and Sergey Sirotkin was 18th and 19th. McLaren’s Fernando Alonso was 17th. McLaren have said they are using practice sessions mainly for testing purposes as they try to rectify their aerodynamic problems.