Veteran Furyk still has the drive to do well 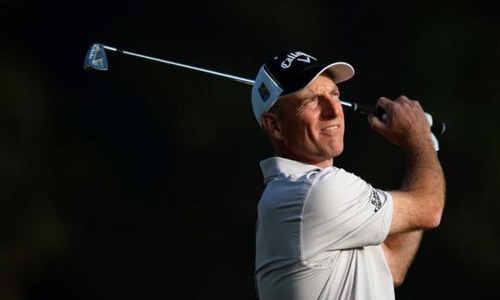 Veteran Furyk still has the drive to do well

LOS ANGELES (Reuters) - While Tiger Woods wrestles with back issues and sharply declining form and Vijay Singh has battled assorted health problems in recent years, veteran Jim Furyk is playing some of the best golf of his career. At the age of 44 and despite a few "dings, nicks and bruises along the way," American Furyk is still one of the most consistent players around as he continues his quest to add further PGA Tour titles to his impressive tally of 16. Criticized by some pundits early on in his career for his highly unorthodox and loopy swing, Furyk's game has stood the test of time and he maintains a high level of fitness while many of his peers have succumbed to injury and dips in form. "So far, I've been fortunate but we all know in this sport that it can be short-lived," Furyk told Reuters while competing in last week's Northern Trust Open at Riviera Country Club where he tied for 14th. "If something happens to the back or whatever it may be, it's a tricky slope. I'm just thankful for the very healthy years that I've had and I do the best to get as many more as I can. "Workouts are something that I enjoy. I feel better, I am stronger, I am more fit. As I get older, I realize that I am more prone to injury and I am trying to not reverse the effects but at least kind of keep them sidelined for a while."   VARIOUS CRITICISMS   Furyk, whose only major victory came at the 2003 U.S. Open, has had only one swing coach during his career – his father, Mike. He vividly recalls the various criticisms of his unique swing while he was making his way as a young professional. "People would say, 'Well, I wonder if that swing will hold up or I wonder if that will cause some injuries?' And now people tend to be on the front end," Furyk smiled. "They say, 'It's efficient and it doesn't put as much stress on my body.' "I think it's just a bunch of bandwagon, if you ask me. So-called experts love to say that this swing puts more force on this or that or whatever it may be. "But most of those people making those comments don't have any medical degrees or know anything about biomechanics probably. It's all an uneducated guess at that moment." Though Furyk has not won on the PGA Tour since the 2010 Tour Championship, he continues to be one of the circuit's most consistent players. He made the cut in all of his 21 starts last season, while recording 11 top-10s. Asked what still motivated him on the golf course as he approaches the twilight of his career, Furyk replied: "I would love to win more golf tournaments. The ultimate aim is you want to raise a trophy and you want to add a title to your list. "But I'm in a good spot right now with the state of my game and the state of my attitude. I'm not saying I'm content but I'm in a place where I'm just enjoying competing. "And because I'm having a good time of it, I have played very well in the process. I've found a way to somewhat juggle family and career and still have the drive to do well. As long as I have that drive, I think I can play well."