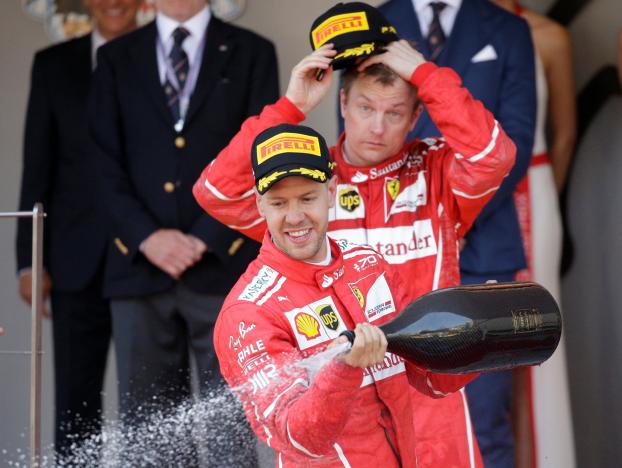 Team mate Kimi Raikkonen, on pole for the first time in nine years, lost out in the pitstops but secured a Ferrari one-two with Hamilton finishing seventh for Mercedes after starting 13th.

The German celebrated as jubilantly as his seven times champion compatriot would have done, whooping over the radio and beaming from the podium as mechanics sang the Italian national anthem.

As with Schumacher in his pomp there was also a distinct whiff of 'team orders', with Raikkonen pitting first and Vettel staying out for a further five laps in a move that worked in his favour.

His 45th career win was the German's third in six races but there was plenty of sympathy for Raikkonen, who last won with Lotus in 2013.

The Finn looked far from happy on the podium, staring fixedly ahead and taking gulps of the Champagne as Vettel sprayed his.

"It's still second place but it doesn't feel awful good," he said. "It's how it goes sometimes."

"I know how it feels, it's not a good feeling," reigning champion Nico Rosberg, who retired at the end of last year after years of battling Hamilton at Mercedes, consoled him as he conducted the post-race interviews on the finish straight.

In a race with plenty of sunshine and minimal overtaking, late crashes ensured the safety car made its traditional Monaco appearance.

While Raikkonen led for the first 34 laps, the writing was on the wall at the pitstops with a consensus emerging already before the start that Ferrari would favour the championship leader.

"It was a very tense race. I knew that (staying out) was the chance to win and I was able to use that window and come out ahead. After that I was able to control the gap behind," said Vettel.

What had been a processional race, with the wider new cars making overtaking more difficult, turned into sudden drama with a collision between Jenson Button's McLaren and Pascal Wehrlein's Sauber at the tunnel entrance.

Wehrlein's car was flipped on its side against the tyre wall and fence, with the German driver trapped inside and marshals unable to do anything about it, after Button went down the inside in what looked like a wildly optimistic attempt to pass.

Button parked his damaged car at the other end of the tunnel with the safety car deployed.

Wehrlein's team mate Marcus Ericsson then ploughed straight on into the barriers at the first corner with 13 laps remaining.

Ricciardo gained his places on strategy, with Dutch team mate Max Verstappen venting his fury over the radio with some pithy language after discovering he was behind his team mate despite starting in front.

Former champions McLaren's hopes of a first point of the season had already disappeared 12 laps from the end when Belgian rookie Stoffel Vandoorne, who had been 10th, crashed at the same place as Ericsson. Renault's Nico Hulkenberg was the first to retire, pulling over at the tunnel entrance with smoke coming out of the rear of his Renault on lap 16. -Reuters