Vettel shows he is still a winner 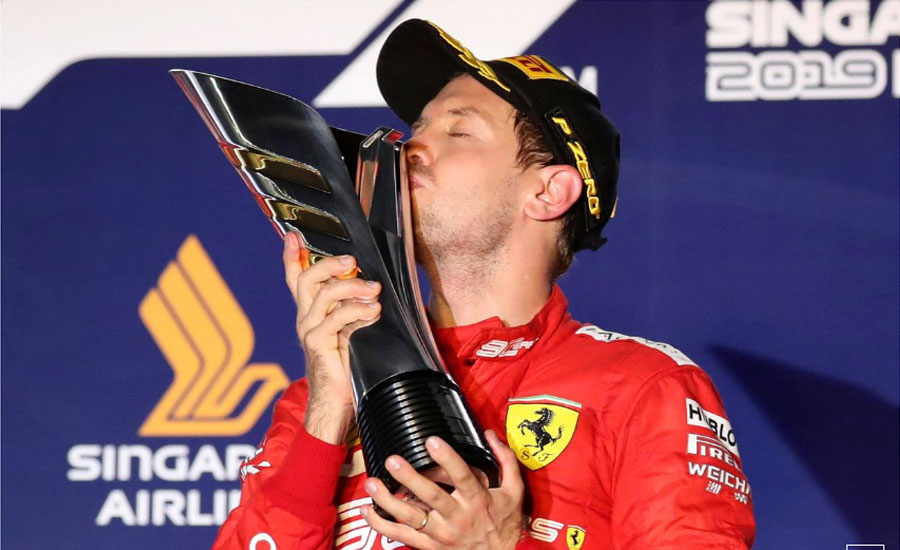 Vettel shows he is still a winner

SINGAPORE (Reuters) - Sebastian Vettel waited more than a year for his 53rd Formula One victory but, although written off by some critics, the Ferrari driver never doubted it would come.
The 32-year-old raced to victory in Sunday’s floodlit Singapore Grand Prix, leading a one-two with team mate Charles Leclerc. It was the first time the quadruple world champion had stood on top of the podium since the Belgian Grand Prix in August 2018. “Maybe less satisfying than you think,” said the German when asked by reporters how it had felt to answer those who had doubted him. “As I said (previously) about form and stuff, I don’t think there was anything wrong. “Things weren’t maybe falling in place, plus I messed up in the race in Monza (Ferrari’s home Italian Grand Prix), that’s my mistake. But overall it’s part of the game. I’ve been around now for a long, long time. It’s just how the tide turns sometimes.” Vettel came into the Singapore weekend under pressure, after a messy outing at Monza where he spun off in an unforced error and was sanctioned by stewards for rejoining the track in a dangerous manner. Leclerc, his 21-year-old team mate in only his first season with Ferrari and second in Formula One, meanwhile won the hearts of the team’s passionate fans by handing the Italians their first win on home soil since 2010. A week earlier he had scored Ferrari’s first win of the season in Belgium, prompting talk that he was now the team’s number one. In contrast, Vettel’s slump in form had fuelled speculation, despite his statements to the contrary, that he might not see out his Ferrari contract which runs to the end of 2020. Despite the slightly controversial nature of his win in Singapore, after he benefited from Ferrari’s strategy to pit earlier than Leclerc, it was clear how much it meant to the German. “I just got a lot of energy in the last couple of weeks from messages that I received from the racing world, from people that I know from a long time ago but especially fans,” said Vettel. “When you read through some of the notes and people’s struggles in life, some very intimate and private, it gets to you and it gave me a lot of belief and just confidence to just keep trying.” Damon Hill, the 1996 world champion who was a big rival of Vettel’s boyhood hero Michael Schumacher, hailed his return to the top. “I think there were a lot of people looking at this race and saying the guy is finished,” the Briton told Sky Sports television. “Some people were saying he’s never going to come back from that (Monza nightmare). Well, he did today.”