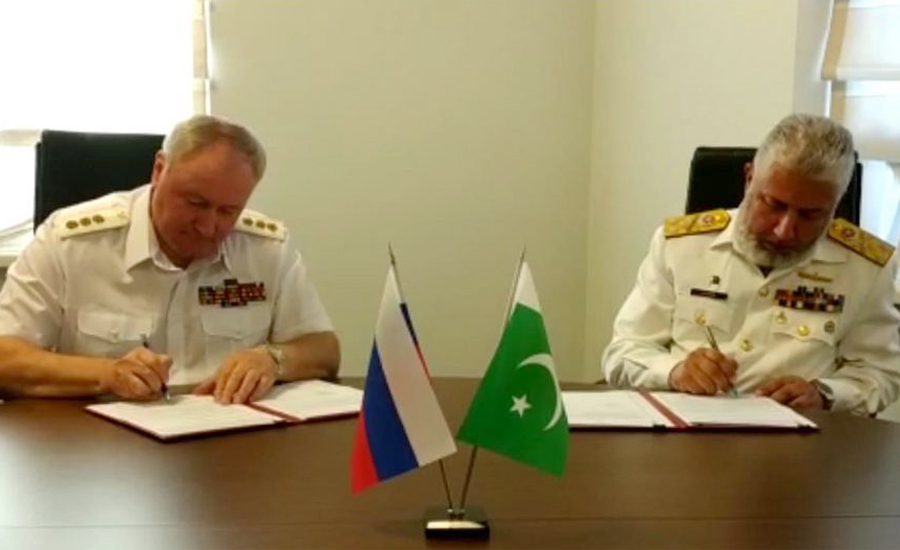 ISLAMABAD (92 News) – While on an official visit to Russian Federation, Vice Chief of the Naval Staff Vice Admiral Kaleem Shaukat called on Commander-in-Chief Russian Federation Navy Admiral Vladimir Ivanovich Korolev at Central Naval Museum at Saint Petersburg, Russia on July 30. During the meeting, discussions on professional matters, bilateral naval collaboration and security environment in the Indian Ocean Region were held. Various avenues of cooperation between the two Navies were also focused. Vice Admiral Kaleem Shaukat highlighted Pakistan’s commitment and performance in fight against terrorism, including Pakistan Navy’s contributions towards regional maritime security, in pursuance of government of Pakistan policies, to ensure peace and stability in the Indian Ocean Region. Commander-in-Chief Russian Federation Navy highly appreciated the role and contributions of Pakistan Navy in maintaining peace and security in the region. The call was followed by an important ceremony during which both the dignitaries signed a Memorandum of Understanding on Bilateral Cooperation in the Naval Field. Both sides, while appreciating the conclusion of the Memorandum on Naval Cooperation, expressed that the Memorandum will certainly boost the existing bilateral naval collaboration between the two Navies. During the visit, Vice Admiral Kaleem Shaukat also attended Main Naval Parade on the occasion of Russian Federation Navy Day besides visiting Naval Shipyard and Russian Navy Frigate, Admiral Makarov. Earlier, a reception dinner was also hosted by Pakistan Navy onboard PNS ASLAT, on port call to Saint Petersburg. The event was attended by large number of foreign and local dignitaries. Pakistan and Russian Federation enjoy cordial relations. A strong partnership between Pakistan and Russian would contribute towards promoting peace, stability and cooperation in the region. It is expected that recent visit of the Vice Chief of Naval Chief will enhance and expand collaboration between the two countries in general and navies in particular.