LAHORE/SAHIWAL (92 News) – Relatives of the victims staged demonstrations against the killings of citizens in an alleged encounter on Sunday. In Sahiwal, the protesters chanted slogans the hospital administration for not handing them over the bodies. In Lahore, the protesters blocked Ferozepur Road at Chungi Amar Sadhu. They said that innocent citizens have been killed in the name of terrorists. 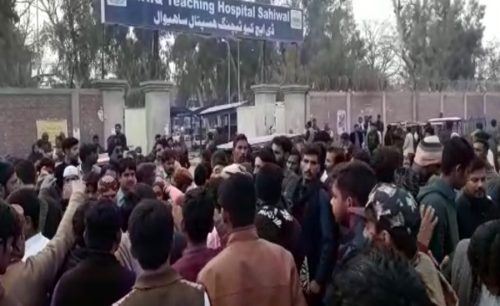 A heavy contingent of police has been deployed on Ferozepur Road. Wardens have been deputed to divert the traffic to other routes. The victims including - Khalil, his wife Nabeela, 13-year-old daughter Areeba, Zeeshan and friend Zishan - were killed by the Counter Terrorism Department. Four people, including two women, were killed by the Counter Terrorism Department (CTD) officials near toll plaza. A child was also injured in the cross-fire, while two remained unhurt. The injured has been shifted to hospital. CTD spokesman said that four people, including two women, were killed. “Three terrorists managed to escape and have been identified as Shahid Jabbar, Abdul Rehman and their accomplice. This was part of the operation in Faisalabad that took place on January 16,” he added. He said that a killed terrorist has been identified, adding that the terrorists were traveling with the family to avoid the arrest. “It is a network of a banned organization who had killed three officers of the ISI in Multan and one in Faisalabad.  Adeel Hafeez was killed in Faisalabad, while Zeeshan was killed in Sahiwal,” he disclosed.