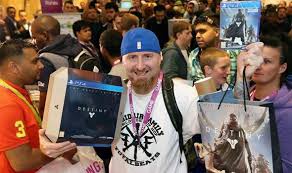 SAN JOSE - The lounge in downtown San Jose, California, looks like any sports pub. Fans crowd around the bar, perch over tables and stare at TV screens, rooting for favorite teams and cheering spectacular plays. But the dozens of people gathered in this tavern in the South Bay Area tech hub Tuesday night were not watching baseball or soccer. They were watching professional computer gamers compete with virtual swords and spells for a potential multimillion-dollar jackpot. The AFKgg Gamer Lounge is one of roughly 50 bars, Internet cafes and arcades across the country hosting "Pubstomp" viewing parties this week for the Dota 2 International 2015 tournament. Professional gamers are competing live at Seattle's sold-out Key Arena for a piece of an unprecedented $18 million prize pool. "It's like a community here," said Google analyst Rohit Gupta, who was visiting the San Jose area from Hyderabad, India, and wanted to watch with like-minded fans. "It’s just like soccer. You get to watch with a lot of people passionate about the game." According to Valve, the publisher of Dota 2, about 11.5 million unique users log on monthly to play the game, in which two teams try to destroy each other's bases in an online arena. Hundreds of thousands of fans have tuned in daily this week to watch streams of the event on sites such as Twitch.TV. But following the virtual carnage at home was not as exciting for 32-year-old software engineer Tan Nguyen, who was at AFKgg's bar, upstairs from the venue's cyber cafe watching with friends. He noted how online gaming has grown more anonymous than in the past, when friends played each other in front of the same TV. "There need to be more places like this," he said, "just to have people come together and have that connection again." Others apparently share his yearning for connection. This year's Pubstomp is the biggest in the event's three-year history, according to Dota 2 project manager Erik Johnson. On Saturday, Fathom Events will bring a livecast of the finals to about 350 movie theaters, said senior director of business development Brian Deulley. "We're kind of shocked every year for the demand of people to travel and see it in person," Johnson said. "But Pubstomps are a way for our users to get together and have the experience that everyone at Key Arena is going to have. It's basically Super Bowl Sunday." -Reuters