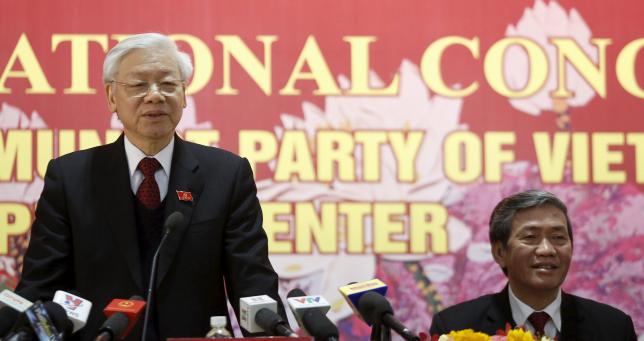 HANOI - Vietnam's Communist Party unveiled a new politburo on Thursday with 12 newcomers and members of the controversial outgoing premier's cabinet, expanding the leadership of a party facing a "heavy" workload of economic reforms.

Nguyen Phu Trong, who stays party chief, pledged to maintain a pro-growth status quo that balances foreign ties and cements a consensus leadership that analysts say was strained by Prime Minister Nguyen Tan Dung's assertiveness in the latter years of his administration.

Trong, 71, said he was a reluctant leader of a party that would move Vietnam towards modernisation.

"My age is high, health is limited, knowledge is limited. I asked to step down, but because of the responsibility assigned by the party I have to perform my duty," Trong told reporters.

"I'm also worried because the upcoming work is heavy."

The 19-member politburo contains conservative and progressive elements, although uncertainty hangs over the outlook for economic reforms rolled out at an unusually fast rate under Dung, whose exit has caused some jitters.

Those might be assuaged by the inclusion of Nguyen Van Binh, the governor of a central bank praised for its stable monetary policy and tackling of bad debt that swamped a beleaguered banking sector.

Joining him is US-educated foreign minister and Dung's deputy, Pham Binh Minh, seen by some experts as a signal of the party's pursuit of even ties between competing superpowers China and United States.

Fred Burke, a board member of the US Chamber of Commerce in Vietnam and managing partner at law firm Baker & McKenzie, said the lineup was reassuring for business and would pick up where Dung left off.

"It's positive," he said. "It's continuity, but continuity with a 21st century bent, a professional bent, with people who are pragmatists who want to roll up their sleeves and get on with it."

Vietnam-US relations have warmed dramatically as tensions between Communist neighbours Hanoi and Beijing have increased over South China Sea sovereignty.

While Trong has been less critical of China's expansionism, Dung was the party's strongest voice in denouncing Beijing and was credited with Vietnam's smooth accession to a US-led Trans-Pacific Partnership.

Trong was the politburo's sole candidate for party chief, running unopposed despite rumours of a fierce showdown with Dung for the top post.

Adding some personality to a traditionally arcane politburo is Dinh La Thang, a media-savvy transport minister who has won popularity for brash comments, rebukes of officials and Facebook accounts carrying his name.

The politburo retains an authoritarian streak, however, with four members hailing from a police force criticised by rights groups for crushing the party's detractors. Nominations for president, prime minister and legislative chair were included. They are Tran Dai Quang, Nguyen Xuan Phuc and Nguyen Thi Kim Ngan, respectively. -Reuters