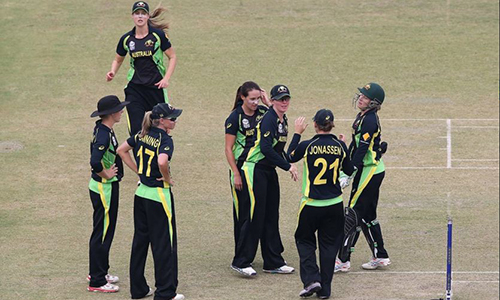 NEW DELHI – Sri Lanka had never beaten Australia in a women’s One-Day International and the record spilled over to the maiden encounter between the two teams in the shortest format of the game, Australia cantering to a nine-wicket win, ICC reported. When Chamari Atapattu, the Sri Lankan captain, won the toss and chose to bat first, she would have been fully aware of the difficulty of the task at hand. Things appeared to be falling into a familiar pattern when Yashoda Mendis smacked the second ball of the innings to mid-on, the first wicket falling without any runs on the board. But, this was a bit of a false dawn for Australia. Atapattu, tall and left-handed, found able company in Dinali Manodara, the diminutive right-hander. Australia’s bowlers, spinners and medium-pacers alike, were forced to constantly adjust the length and line they were bowling depending on who was on strike, and this did not always prove easy. When there was width on offer, Atapattu used her reach well, slicing the ball behind point to pick up a boundary. While she was not overly adventurous, Atapattu certainly enjoyed her fair share of luck, when thrice the ball flew off the edge to beat the field behind the bat and fetch boundaries. Manodara middled the ball with greater authority and she clearly favoured the leg side. A paddle sweep was placed perfectly wide of fine leg, a full ball mowed through midwicket and a sweep off Jess Jonassen’s slow-left-arm orthodox comfortably found the fence. Atapattu and Manodara had confidently added 75 for the first wicket before Australia broke through, Kristen Beams tempting Manodara into a false stroke against her legspin, only to find the stumps via the edge. Manodara had made 38 and Atapattu fell soon after, having registered the same score, this time the ball making its way to the stumps via the pad. Australia then began to assert itself, picking up wickets at regular enough intervals to keep the scoring rate in check. Megan Schutt used cutters and variations cleverly, making sure that none of the batters arriving at the crease felt any measure of confidence in playing their shots. Sri Lanka ended on 123 for 8, and had given itself a fighting chance. That fight, however, did not last long. In its last match, Australia was reduced to 4 for 4 against New Zealand, but Alyssa Healy and Elyse Villani had clearly put this behind them. Shot selection was decisive, placement was spot on and the runs began to flow freely. Even the fall of Healy, bowled attempting a big shot to make the most of the Power Play, did not bring Sri Lanka relief. Meg Lanning joined Villani and from here on it was one-way traffic. Sri Lanka’s bowlers gave it what they could but the batting class on display was simply too good to resist. Villani was especially bright, hitting nine boundaries in an unbeaten 53 that came off only 39 balls, and Lanning helped herself to a 53-ball unbeaten 56. The pair added 98, comfortably seeing Australia home with 14 balls to spare.