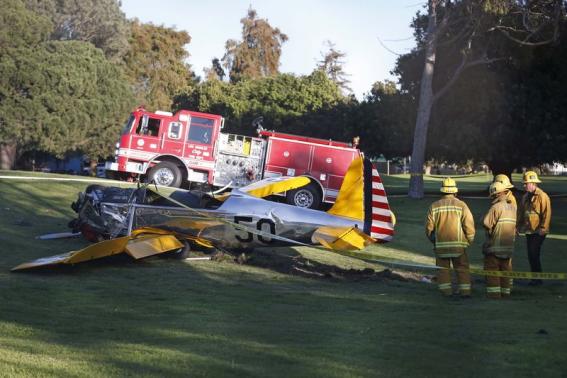 LOS ANGELES - Actor Harrison Ford was piloting a World War Two vintage plane that had been restored to a high standard when he crash landed at a Los Angeles golf course after reporting an engine failure, an investigator said on Friday. Moments after Ford took off in his 1942 single-engine plane on Thursday from Santa Monica Airport, he attempted a return landing, clipped a tree and crash landed at nearby golf course, short of the intended runway, officials said. National Transportation Safety Board investigator Patrick Jones indicated, without mentioning Ford by name, that federal investigators have not yet spoken to the actor, an experienced aviator who was hospitalized following the crash. Aviation records list the plane as a Ryan Aeronautical ST-3KR plane, which is also known as a PT-22 Recruit. "My understanding is that it was restored and actually was an award-winning restoral," Jones told reporters at the scene of the crash, adding investigators plan to soon disassemble the plane and transport it to another site for inspection. The 72-year-old star of some of the biggest films of the 1980s is expected to make a full recovery from injuries that his publicist said are not life threatening. (Reuters)