Violence escalates in east Ukraine ahead of talks 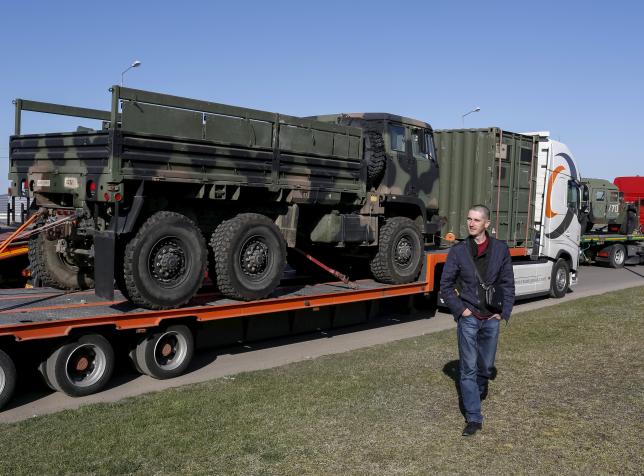 Violence escalates in east Ukraine ahead of talks

KIEV - Ukraine's military accused pro-Russian rebels on Monday of using heavy weapons that were meant to have been withdrawn under a ceasefire deal, after one Ukrainian serviceman was killed and six wounded in rebel-held territories. With fighting intensifying once more, the foreign ministers of Ukraine, Russia, France and Germany were due to meet in Berlin later on Monday to discuss the next steps in implementing a ceasefire agreement signed in the Belarussian capital Minsk in February. "The rebels have not stopped firing at Ukrainian positions ... Over the past day, the enemy has used weapons banned under the Minsk agreements," Ukrainian military spokesman Oleksandr Motuzyanyk said in a televised briefing. Under the deal, weapons bigger than 100 mm calibre, including heavy artillery and powerful rocket systems, are meant to have been withdrawn from the front line. Motuzyanyk said rebels had fired at government troops multiple times with 120-122 mm weapons. Meanwhile separatist officials accused government troops of firing tank and artillery rounds repeatedly at rebel positions, the separatist news agency DAN reported. It also quoted senior rebel commander Eduard Basurin as saying two local journalists had been wounded by Ukrainian firing around Pisky, near the rebel-held city of Donetsk. The Organization for Security and Cooperation in Europe (OSCE), which is monitoring the implementation of the ceasefire deal, also reported a sharp spike in hostilities over the weekend. Speaking ahead of the four-way talks, French Foreign Minister Laurent Fabius said he and his German counterpart Frank-Walter Steinmeier were concerned by the ceasefire violations and a lack of political progress in Ukraine. "We are going to remind our colleagues, both Russian and Ukrainian, that the Minsk process must be respected and must be respected before the end of the year," he told reporters. Over 6,000 have been killed since the conflict erupted a year ago, when rebels opposed to the ousting of a Moscow-backed president and the installation of a pro-Western government declared independence from Kiev. Ukraine and the West say they have evidence that Russia has sent men and weapons to support the rebels, a charge Moscow denies. - Reuters