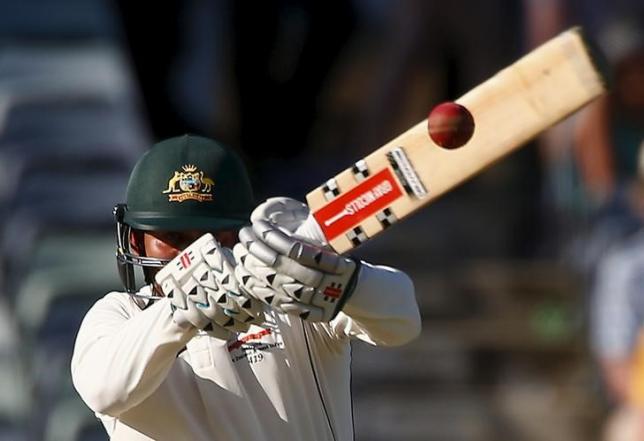 Voges was unbeaten on 176 at stumps with Peter Siddle on 29 as the Australians stretched their advantage to 280 runs, snuffing out any hope New Zealand had of claiming victory in captain Brendon McCullum's 100th test.

The 36-year-old Voges has made the most of a lifeline when he was bowled by Doug Bracewell for seven with two deliveries remaining on Friday, only for umpire Richard Illingworth to signal a no-ball.

Television replays showed the delivery was legal but because the infraction had been called on the field, New Zealand were unable to ask for a review.

Voges was involved in partnerships of 168 with Usman Khawaja (140) and 96 with wicketkeeper Peter Nevill (32) to prevent New Zealand from gaining any momentum on a tough day for the hosts.

New Zealand briefly appeared to be in position to expose the Australian tail during the middle session when Trent Boult took two wickets, including Khawaja's, in three deliveries but Voges calmly ensured that the visitors maintained their dominance.

The late-blooming Voges, who was 35 when he made his debut against West Indies last June, has scored 1,204 runs in a bountiful test career to date, boasting a high score of 269 not out and an average of 100.33.

"He's got an average higher than (Australian batting legend) Don (Bradman) at the moment, so I might just have to call him Sir Voges," Khawaja joked.

"He's almost faultless the way he went about it. Batted very sensibly, patiently at the start, was hitting a lot of good shots straight to fielders, but didn't get frustrated with it.

"The way he's been batting lately it feels like he's not going to get out."

As Australia resumed on 147-3 in response to New Zealand's 183 all out, the only excitement for locals at a sold-out Basin Reserve came during that eventful Boult over in the middle session.

Corey Anderson claimed the only other wicket of the day when he enticed Nevill to edge behind to make the score 395-6.

While Australia have batted themselves into a position they are unlikely to lose from, New Zealand's past record at the Basin Reserve should provide local fans with some hope.

In their last two matches at the Wellington ground, they conceded large first innings leads before scoring 680-8 to save a test against India two years ago and 524-5 to set up a win last year against Sri Lanka.

"We can see how flat the wicket has become. We're not getting a lot of movement out of it," New Zealand bowling coach Dimitri Mascarenhas said.

"Hopefully that will be the same for the Aussie boys when they have to bowl on it. We just have to get through that new ball because you can take wickets with it."

The second test of the two-match series is in Christchurch from Feb. 20-24. –Reuters