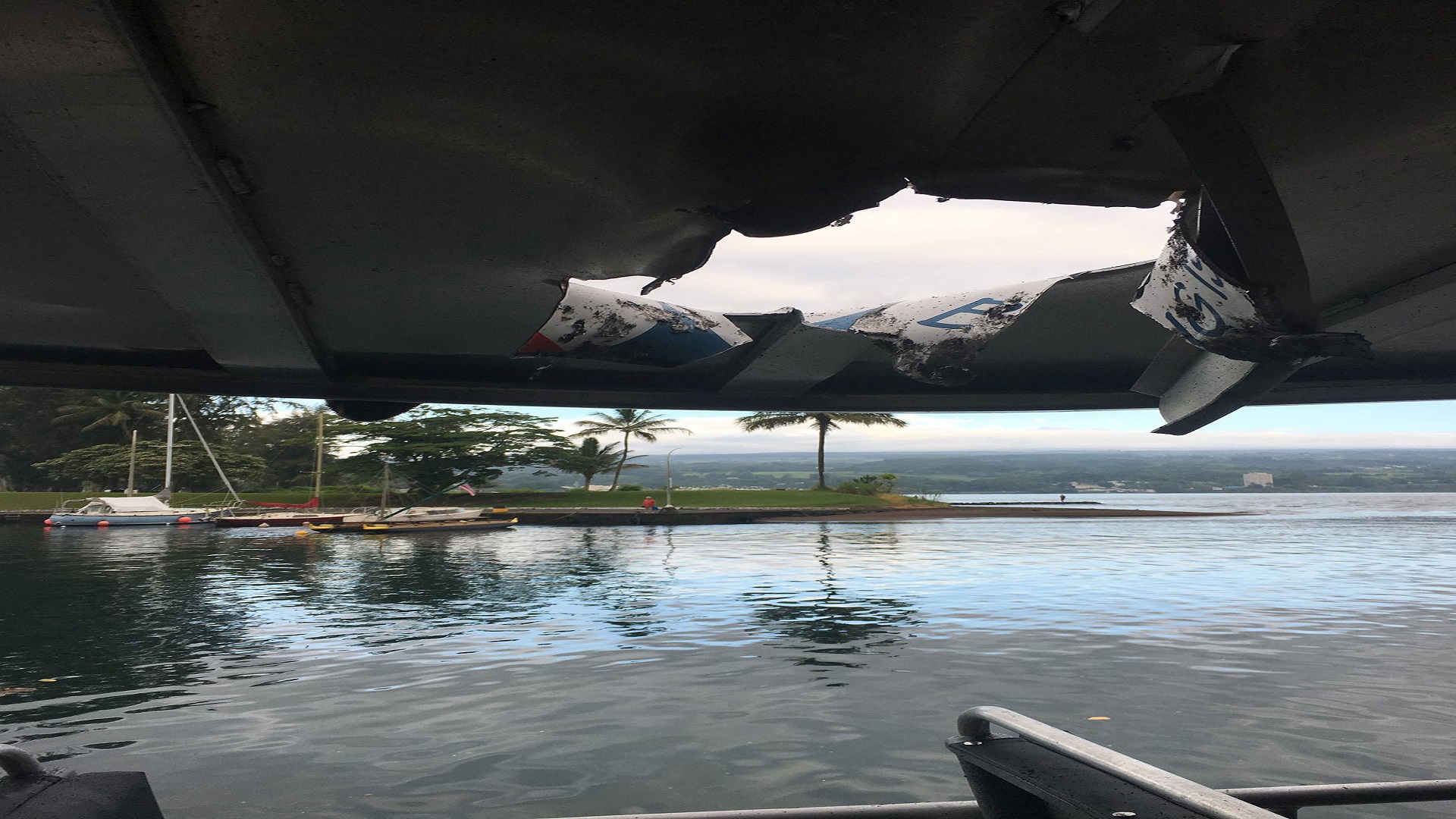 HONOLULU (Reuters) - A blob of hot volcanic lava struck an ocean tour boat just off the Big Island of Hawaii , injuring nearly two dozen people in the worst casualty incident to date from the ongoing eruption of the Kilauea Volcano. A huge steam-driven explosion, caused by molten rock mixing with seawater as it poured from the shoreline, sent a “lava bomb” crashing through the roof of the boat and into the vessel’s seating area, authorities said. The boat returned to port in Hilo on its own power less than an hour later, and three of the injured, including a woman in her 20s whose leg was broken, were taken to a local hospital by ambulance, Hawaii County Fire Department Battalion chief Darwin Okinaka said. Nine or 10 others with less severe injuries were driven to the hospital by private vehicle, and 10 more people were treated by paramedics at the port, he told Reuters by telephone. A civil defense spokeswoman, Kelly Wooten, put the total number of injuries at 23. The Hawaii Department of Land and Natural Resources (DLNR) said the boat was operated by Lava Ocean Tours, one of at least three companies offering daily excursions to passengers who pay around $220 per person to watch from a vessel lava flowing into the sea.
The stricken 49-passenger-seat vessel, dubbed Hot Spot, was later videotaped maneuvering to its dock after passengers were unloaded. A still photograph furnished by DLNR showed a gaping hole in its canopy.

The boat was also showered with smaller bits of volcanic debris and cinder from the explosion. Eyewitness video footage from a nearby vessel showed a towering cloud of steam and ash billowing into the sky, punctuated by the glow of red-hot embers and flashes of lightning. Officials for the company were not immediately available for comment. State and local police and the DLNR were investigating the incident, which occurred shortly after dawn near the eastern-most edge of the Big Island, where lava from the 10-week-old Kilauea eruption has been flowing into the Pacific since early June. The boat’s distance from shore and from the site of the lava explosion was not immediately known, authorities said. Vessels are generally barred from venturing any closer than 300 meters (yards) to lava ocean entries under US Coast Guard safety rules, though experienced boat operators had received special permission to get as close as 50 meters (yards), according to agency spokeswoman Amanda Levasseur. Lava Ocean Tours, whose website promised excursions allowing passengers to “see, hear and feel the heat” from lava flows entering the ocean, is the oldest of several tour boat companies operating in the region. Levasseur said that after incident, the Coast Guard would strictly enforce its 300-meter buffer zone exclusively. The reaction of molten lava and cold seawater, especially at shallow depths, is always a volatile combination capable of producing large steam-driven explosions that can launch chunks of volcanic fragments hundreds of feet (meters) in the air, US Geological Survey geologist Janet Babb told reporters on a conference call. Boaters and seaside residents also have been warned to avoid noxious clouds of laze — a term derived from the words “lava” and “haze” — formed when lava reacts with saltwater to form a mix of acid fumes and steam laced with tiny glass-like particles. Two entire housing developments consisting of hundreds of dwellings were destroyed several weeks ago as lava spewing from a fissure on the slope of the volcano inundated the seaside Kapoho area in the vicinity of boat accident. Hundreds more homes have been swallowed closer to the eruption site. The property losses marked the most destructive eruption of Kilauea in modern times, but no fatalities have been reported. The most serious previous injury was of a man whose leg was shattered in May when he was hit by molten lava ejected by a volcanic fissure while he was standing on the third-floor balcony of his home about 200 yards (meters) from a flow in the Pahoa area.