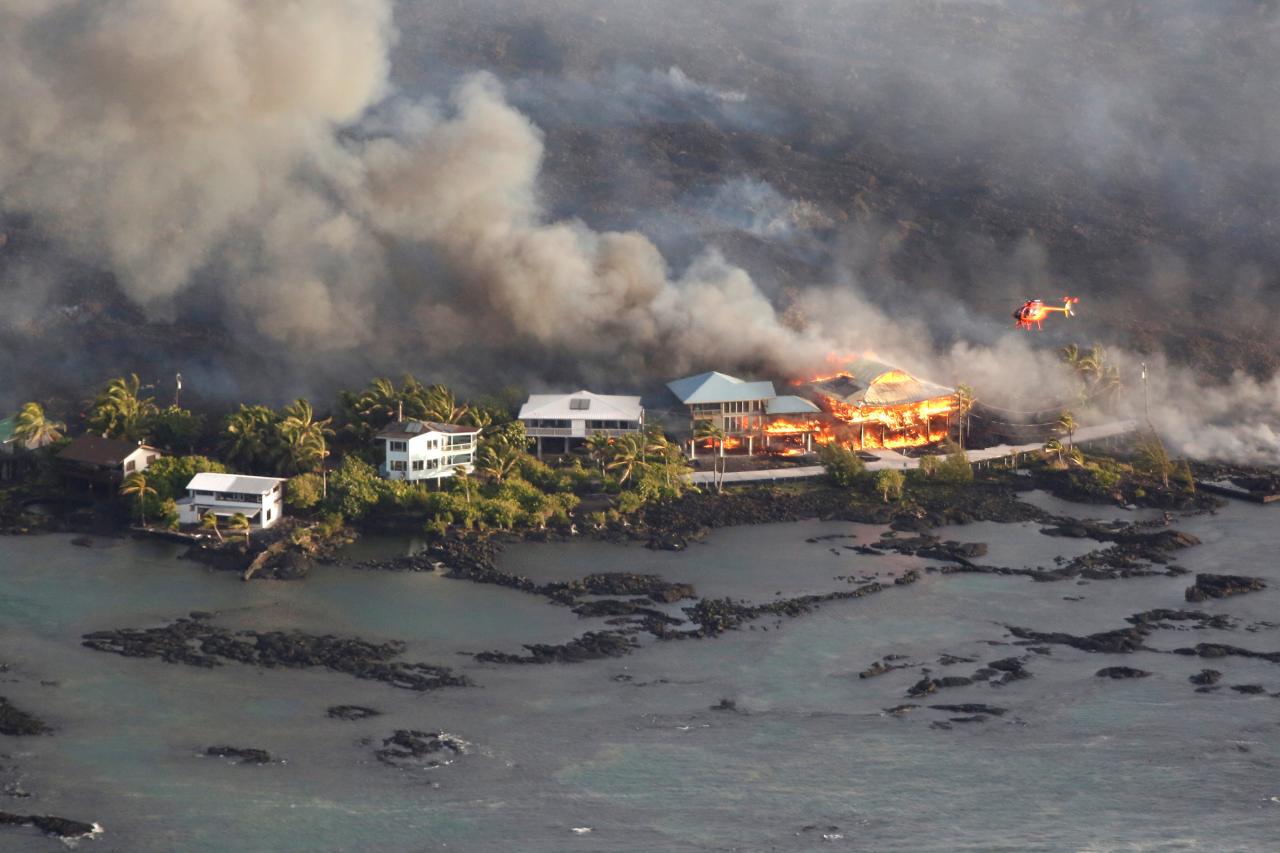 PAHOA, Hawaii (Reuters) - An ever-creeping wall of lava from Kilauea Volcano has engulfed two entire seaside housing tracts at the eastern tip of Hawaii’s Big Island, government scientists reported , an area where civil defence officials said nearly 280 homes once stood. The obliteration of the Kapoho Beach Lots and Vacationland subdivisions by a churning river of molten rock some 10 to 15 feet (3 to 4.6 meters) tall brings to at least 350 the number of homes and other structures consumed by volcanic lava during the past month. That latest toll of property losses from Kilauea’s ongoing upheaval, which entered its 35th day , far surpasses the 215 structures destroyed by lava during all 35 years of the volcano’s last eruption cycle, which began in 1983. “Vacationland is gone, there’s no evidence of any properties there at all,” Wendy Stovall, a vulcanologist with the US Geological Survey (USGS), told reporters on a conference call. At the adjacent Kapoho Beach lots to the north, “just a few homes” are left standing, she added. The two communities, comprising a quiet vacation spot once popular for its snorkelling and tide pools, sat at the edge of a small, shallow inlet called Kapoho Bay. Lava pouring into the ocean there has completely filled in the bay, extending nearly a mile (1.6 km) out from what had been the shoreline, USGS scientists said. Plumes of white steam and hydrochloric acid fumes, a vaporous, corrosive mix formed from lava reacting with seawater as it enters the ocean, could be seen rising from a distance.

Authorities began evacuating the greater Kapoho area last week and ushered most of the last remaining residents to safety early on Saturday, hours before the lava flow severed all road access to the region. “I just locked my doors and walked away,” said Betty Oberman, a 28-year Vacationland resident who headed the neighbourhood watch organisation there. “It’s an emotional roller coaster.” The river of lava then spread out into a towering blob about a half-mile (800 meters) wide as it crept through the flat, open landscape of the subdivisions, swallowing everything in its path over the following few days. A handful of residents who initially stayed behind rather than heed the evacuation order were airlifted by helicopter on Sunday, officials said. Several miles (km) west of Kapoho Bay, another 80 structures, mostly homes, were destroyed weeks ago in the Leilani Estates community, where lava-spouting fissures in the ground first opened on May 3 on the volcano’s lower flank, according to civil defence officials. Most of the two dozen volcanic vents have grown largely quiet over the past week, with just one, Fissure 8, still spewing large volumes of molten rock from the ground , the USGS said. Fissure 8 is the origin of the lava flow that devastated the Kapoho area. Lava had covered nearly 8 square miles (20.7 sq km) of landscape as of Monday, and some 9,900 earthquakes had been recorded on the Big Island since Kilauea rumbled back to life last month. That’s nearly 10 times the monthly historic average for seismic activity on Hawaii Island, according to the USGS.