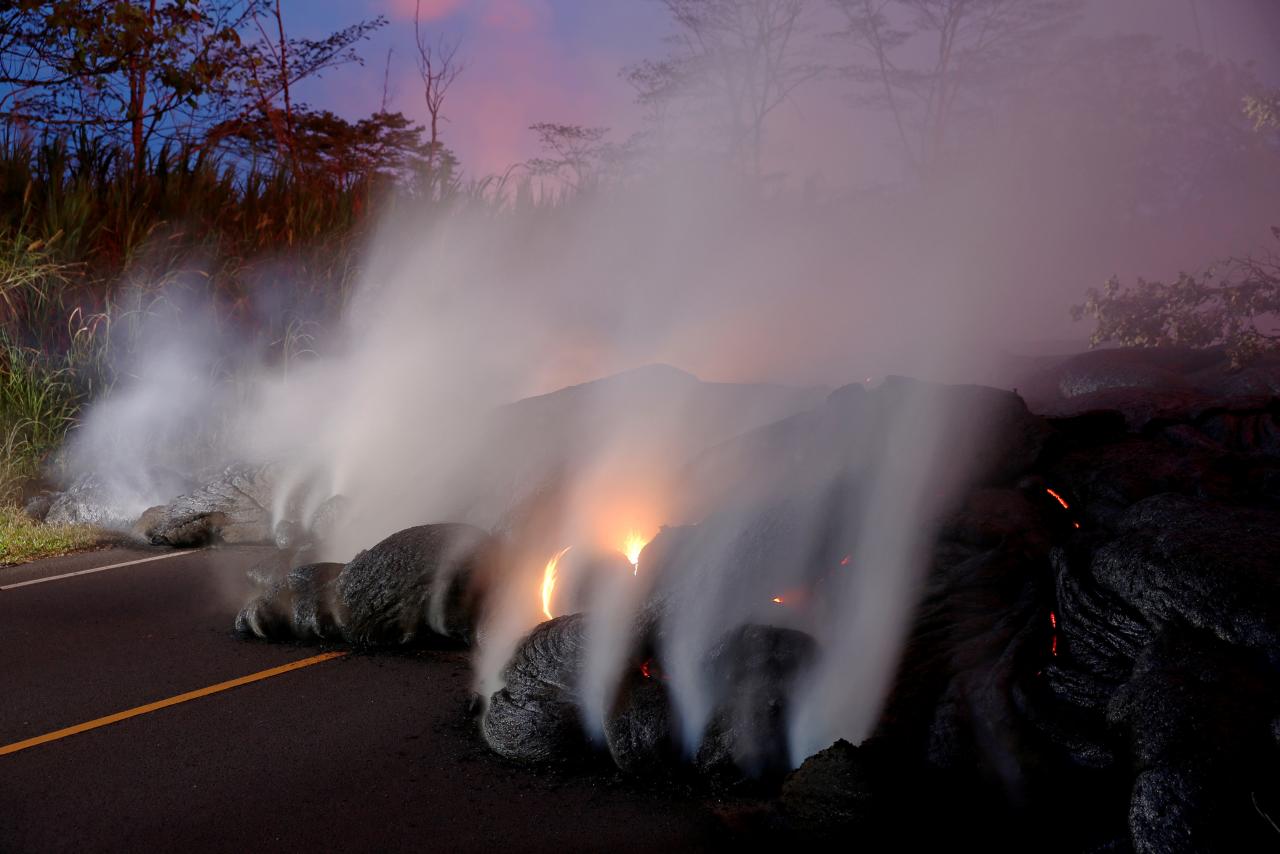 HONOLULU (Reuters) - Molten rock from several lava-spewing fissures opened by Kilauea Volcano crept toward clusters of homes and vacation rentals on the eastern tip of Hawaii’s Big Island , prompting authorities to usher residents out of the area as a precaution. Evacuation of the Vacationland development and adjacent Kapoho community, rebuilt after a destructive eruption of Kilauea in 1960, came on the 28th day of what geologists rank as one of the biggest upheavals in a century from one of the world’s most active volcanoes. The Hawaii County Civil Defense agency issued the advisory as lava flows picked up speed late on Tuesday and early and threatened to cut off a key traffic route into the seaside area on the far eastern flank of the volcano. “Residents in the Kapoho area, including Kapoho Beach Lots and Vacationland, are advised to evacuate,” the agency said in a morning bulletin. “You are at risk of being isolated due to possible lava inundation of Beach Road.” Earlier, a lava stream crossed a larger east-west route, Highway 132, as it advanced toward the greater Kapoho area. A separate flow of red-hot molten rock was headed in the direction of the Vacationland community to the south. Civil defense officials also pointed to severe communication outages in the area due to downed power and phone lines, reinforcing the decision to proceed with evacuation plans immediately rather than wait for a potential emergency. Residents were urged to stay tuned to local radio stations for further updates. The number of people affected by evacuations was not precisely known, but Kapoho and Vacationland together encompass about 500 homes, mostly vacation rentals, according to Civil Defense Administrator Talmadge Magno. An estimated 2,500 residents in all have been displaced since the eruption began nearly four weeks ago, Magno said. The bulk of evacuees were forced from their homes at the outset, in and around the Leilani Estates community farther west, where concentrations of noxious volcanic gases remain high. Hawaii County Mayor Harry Kim renewed an emergency proclamation for 60 more days, allowing construction of temporary shelters and other relief projects to proceed on an expedited basis, without reviews and permits normally required. At least 128 structures on the island have already been destroyed, cut off or otherwise left uninhabitable by lava flows, Kim said. Magno said 75 homes have been demolished. Kilauea’s main crater at the volcano’s summit has continued to periodically belch ash high up into the sky. But National Weather Service meteorologist Tom Birchard told reporters during a conference call that most of the ash was blowing out to sea on the prevailing trade winds, then dissipating quickly. Nevertheless, some ash and fumes have been spouted high enough into the atmosphere to be carried far over the Pacific Ocean, with observers in the Marshall Islands, Micronesia and Guam detecting traces of vog - a hazy mix of sulphur dioxide, aerosols, moisture and fine particles, Birchard said. Kilauea rumbled back to life on May 3 as it began extruding lava and toxic gases through a series of cracks in the ground on its eastern flank, marking the latest phase of an eruption cycle that has continued nearly nonstop for 35 years. The occurrence of new lava vents, or fissures, now numbering about two dozen, have been accompanied by flurries of earthquakes and intermittent eruptions from the summit crater, including a magnitude 5.3 tremor measured.