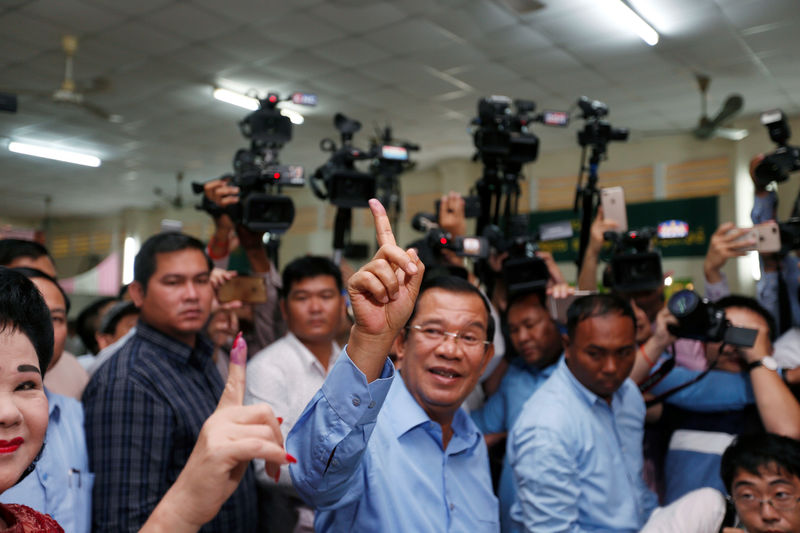 PHNOM PENH (Reuters) - Voters headed to the polls in Cambodia on Sunday in an election Prime Minister Hun Sen is expected to easily win, extending his 30-plus years in power, after the main opposition party was dissolved and the government cracked down on critics. Hun Sen’s opponents have called for an election boycott, saying that without any real opposition to the government, the poll will be a sham. Nineteen political parties are running against Hun Sen’s ruling Cambodian People’s Party (CPP) but none are strongly critical of the prime minister or the government. Ros Vireak, 34, emerged from a polling booth in Phnom Penh’s city centre, where 12 parliamentary seats are up for grabs, with his finger stained in ink to show that he had voted. “I don’t see any problem with this election. As a citizen, I fulfilled my obligation to vote,” Ros Vireak said. He declined to say who he voted for. Voting is not mandatory, but authorities have warned that anyone who boycotts the vote will be seen as a “traitor”. Critics say the election marks the decimation of democracy in the Southeast Asian country following months of intimidation by the ruling party Cambodian People’s Party (CPP) and the dissolution last year of the main opposition Cambodia National Rescue Party (CNRP) by the Supreme Court. Just two days before the election, authorities shut the websites of some independent media. Canada’s ambassador to Thailand, Cambodia and Laos, Donica Pottie, said on Twitter that Cambodia had entered a “new period of single-party rule”. “Early am, Election Day in Cambodia. I feel today marks end of the promise of the peace agreement 25+ yrs ago and new period of single-party rule,” she wrote. Phil Robertson, deputy director of Human Rights Watch’s Asia Division, said many voters are grudgingly going to the polls. “Fear and the need to survive are driving turn-out as much as anything any of the parties had to say during the campaign period,” Robertson told Reuters in an e-mail. At Takhmao commune in Kandal province, about nine kms (six miles) from the capital Phnom Penh, Hun Sen, accompanied by his wife, cast his vote and showed an ink-stained index finger to gathered media. He declined to speak to reporters. Hun Sen, a former Khmer Rouge commander who eventually defected from Pol Pot’s murderous regime, is the world’s longest serving prime minister. The opposition CNRP, appealing to younger voters and those seeking change, narrowly lost the last general election in 2013. The government insists that the 2018 vote will be free and fair. “This election is about the Cambodian people’s will and power,” government spokesman Phay Siphan said in an interview. “People are highly determined to keep peace and stability.” The CPP has urged people to vote, despite calls from CNRP leaders to boycott the election. A low-voter turnout could undermine the CPP’s claims to legitimacy. Some 8 million people are registered to vote and election commission officials expect a 60 percent turnout, well below the 70 percent rate of the 2013 general election. The National Election Committee will announce preliminary results on Sunday night. Official results are expected in mid-August.