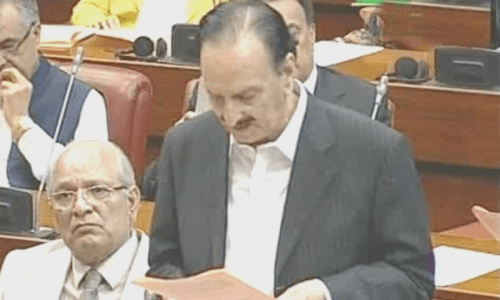 Barrister Muhammad Ali Saif, who chaired the session, directed the senators who were in favour of the resolution to stand on their seats. About 64 senators stood up in support of the motion to table the no-confidence resolution. Zafarul Haq then tabled the resolution but said that the opposition will not make any speeches even though the rules allow a debate. PTI Senator Shibli Faraz also waived his right to make a speech, saying that the government wishes for the motion to be put directly to the vote. Following these announcements, Barrister Saif read out the rules for voting on the resolution. The resolution – which demands the removal of the Senate chairman under Rule 12 (Removal of Chairman or Deputy Chairman) of the Rules of Procedure in Conduct of Business in the Senate – was drawn up by PPP's Sherry Rehman and PML-N Senator Javed Abbasi and signed by members of the opposition. A requisition was also submitted, asking for a session to be called so that the resolution can be moved in the Senate. Meanwhile, the voting process has been ended. There are 100 senators attending the session today and a total of 53 votes are required to oust the chairman and deputy chairman of the Senate. 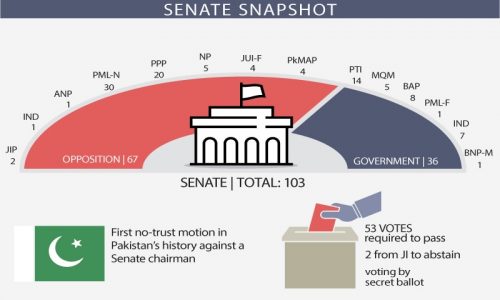 Senate Party Position The opposition benches have 67 seats in the Senate, however, 2 senators from the JI will abstain from voting. PML-N: 30 PPP: 21 NP: 5 PkMAP: 4 JUI-F: 4 ANP: 1 The government benches have 36 seats in the Senate. PTI: 14 BAP: 8 Ex-FATA: 7 MQM-P: 5 PML-5: 1 BNP-M: 1 It is declared mandatory to insert a vote into the ballot box after casting vote in favour or opposition. The instructions were issued in a letter released by Senate Secretariat for voting on the no-confidence motion. The secretariat has also imposed a ban on carrying mobile phones in the polling booth. The letter also stated that grabbing photos of the ballot paper is also prohibited in order to ensure secrecy of the vote. For the first time in the history of Pakistan, a no-confidence motion has been submitted against the senate chairman, demanding he steps aside after only being in office for over a year. The opposition parties have nominated Hasil Bizenjo as their candidate for the post of chairman Senate. On July 10, the opposition had submitted a resolution of no-confidence against Sanjrani to the Senate Secretariat. The no-trust motion was signed by 44 senators. The opposition claimed to have 65 votes as more than 50 senators from the PPP, PML-N, National Party, Pakhtunkhwa Milli Awami Party, JUI-F and Awami National Party, besides members from the erstwhile FATA were in attendance. Meanwhile, the government was claiming the move would fail as many opposition senators would vote for Sanjrani in line with their conscience. On the other hand, Sadiq Sanjrani said that he would resolutely face the opposition’s motion to oust him and decided not to give his resignation. “We will rout the opposition’s no-confidence motion,” he added. He slammed the opposition parties over rumours of his stepping down from the office. Next candidate for Senate chairman Hasil Bizenjo hosted a dinner for the opposition senators as part of efforts to keep their numbers intact. This function was also attended by PML-N vice president Maryam Nawaz on special invitation. The dinner was also attended by leader of the opposition in the National Assembly, PPP chairman, JUI-F chief, PPP’s parliamentary leader in the Senate Sherry Rehman and Mehmood Khan Achakzai. Rule 12(9) says the Senate shall not be adjourned until the motion for leave is disposed of or, if leave is granted, the resolution has been voted upon. Rule 12(12) reads: “The Chairman or, as the case may be, Deputy Chairman, shall stand removed from his office on the resolution being passed by a majority of the total membership of the Senate.” A total of 53 votes are required to remove the chairman and deputy chairman from their offices. The opposition has a total of 67 members, one of whom former finance minister Ishaq Dar has still not taken oath. Out of the remaining 66 senators, two belong to JI, which has decided to abstain from the proceedings.