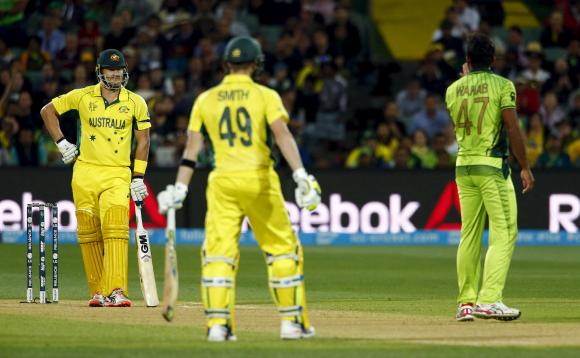 SYDNEY – Pakistan paceman Wahab Riaz and Australia all-rounder Shane Watson have been fined for over-stepping the mark during their fiery confrontation in Friday's World Cup quarter-final. Watson withstood a fierce barrage of pace bowling from a fired-up Wahab in a compelling duel that transfixed the Adelaide Oval crowd for half an hour, bowler goading batsman after almost every short delivery. Dropped in the deep on four, Watson survived to score 64 not out and steer Australia to a six-wicket victory with a place in the semi-finals against India as their prize. "It was an enthralling contest between Shane and Wahab, but in the closing stages of the match both players crossed that fine line between intense competition and unacceptable behaviour, and this resulted in the sanctions," match referee Ranjan Madugalle said in an ICC statement. Wahab, who finished with figures of 2-54, was fined 50 percent of his match fee for "using language or a gesture that is obscene, offensive or insulting". Watson, who was docked 15 percent of his fee, was found guilty of the lesser charge of "conduct contrary to the spirit of the game" for ignoring the umpire's warning and speaking to Wahab. –Reuters