Wales and France make it three out of three 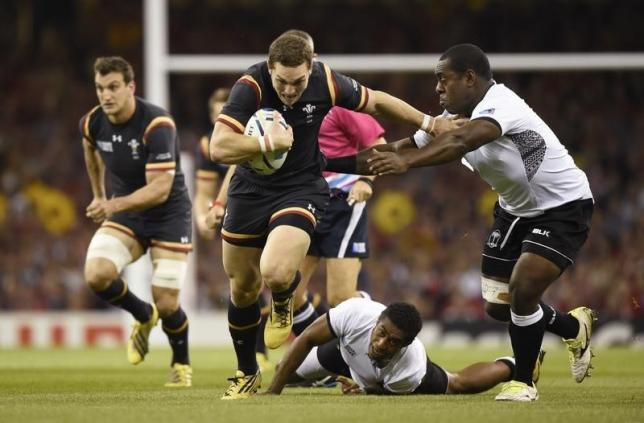 Wales and France make it three out of three

LONDON - A tired Wales edged past Fiji while France endured some uncomfortable moments in their win over Canada on Thursday, as both sides made it three wins out of three in the Rugby World Cup. Despite a crippling casualty list and being drawn in the toughest pool in the history of the tournament, Wales backed up their win over England on Saturday with a 23-13 defeat of Fiji in a breathless Pool A clash. France, meanwhile, scored two late tries to secure a bonus- point 41-18 win over a spirited Canada in Pool D, in what was a much tighter match than the score line suggests but which puts the French on the brink of the quarter-finals. The Welsh win means that England must beat Australia on Saturday or they will become the first main host nation not to make the group stage. However, an English win could mean that bonus points could decide the outcome. If that is the case, Wales may rue having squandered a couple more try-scoring chances against Fiji that may have earned them extras. Speaking after Thursday's match, an exhausted Wales captain Sam Warburton said that was not a major issue. "It is disrespectful to Fiji to talk about a bonus point," he said. "After the turnaround we had and because we knew Fiji are a completely different team now. Credit to Fiji they made it very difficult for us, breaking the line and forcing us to make a lot of tackles." France had to wait until late in the game to snatch a try-scoring bonus point against a Canadian side who were never afraid to counter-attack at pace or spin the ball wide and stood toe to toe in the physical exchanges. Coach Philippe Saint-Andre was happy to see his side notch a third win but was never able to completely relax. "I was a bit stressed because you never know with the French way, what will happen," he said. The 2011 runners-up had previously notched up sterile wins over Italy and Romania and will be hoping to find their flair for their final match against Ireland on Oct.11 which will probably decide the group winner. CRUNCH MATCH Australian coach Michael Cheika has reverted to his first choice starting side for Saturday's crunch match against England, with twin openside flankers David Pocock and Michael Hooper in the back row, Cheika will hope the combination, which was first tried out in the victory over New Zealand in August, will give the Wallabies an edge at the breakdown over England's less mobile flankers. England have recalled centre Jonathan Joseph, who returns after missing the Wales defeat with a chest injury, with fans hoping his quick feet and outside break will add some threat in the backline to go alongside their traditional forward strength He will line up outside defensive organiser Brad Barritt, while Owen Farrell retains his place at flyhalf after an assured performance against Wales last week. England have beaten the Wallabies in four of the teams' last five meetings but both coaches are expecting the tightest of encounters on Saturday. It was not good news for Scotland on the injury front, with their main playmaker Finn Russell ruled out for their toughest match of the campaign so far against South Africa on Saturday. Coach Vern Cotter made 10 changes to his team for the contest in Newcastle, with Duncan Weir replacing Russell at flyhalf. Flanker Blair Cowan comes straight into the starting line-up after replacing the injured Grant Gilchrist in the squad. Prop Gordon Reid and centre Richie Vernon also make their first starts of the tournament. History points to South Africa as firm favourites on the back of 11 wins from their last 12 meetings, the most recent of which was last year's 55-6 drubbing in Port Elizabeth. Samoa and Japan also named their sides for the other Pool B match in Milton Keynes on Saturday where Japan will be seeking to make it two wins in a tournament for the first time. Off the field, Tonga prop Tevita Mailau has been cited for foul play related to a tackle made during the match against Namibia on Tuesday. Mailau's hearing will take place on Friday. -Reuters