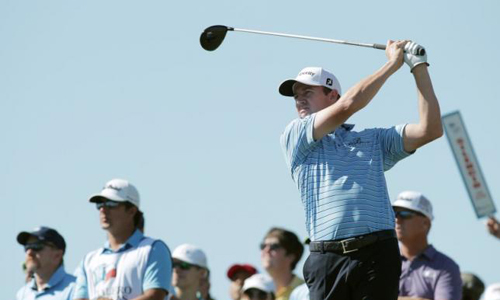 TEXAS - American Jimmy Walker held firm, shooting a three-under-par 69 to open up a four-shot lead, as winds returned to vex players at the Texas Open in San Antonio on Saturday. Walker, who led by one after 36 holes, shared the lead with fellow Texan Jordan Spieth before a late surge took him to nine-under-par 207. Local resident Walker posted three birdies in five holes from the 14th, capped by back-to-back birdies at the finish. Spieth, who won his last PGA event two weeks ago at the Valspar Championship, shot a rollercoaster 71 that included six birdies, three bogeys and a double-bogey at the par-three 16th to stand second at five-under 211. FedExCup champion Billy Horschel birdied the last three holes for a 71 that put him three-under for the championship and one shot ahead of a group of five at 214 that included two-time Texas Open winner Zach Johnson. Charley Hoffman, who trailed Walker by one at the tournament's halfway mark, soared to a windblown seven-over 43 on the front nine with three bogeys and two double-bogeys and shot 79 to finish the day 12 strokes behind Walker. - REUTERS