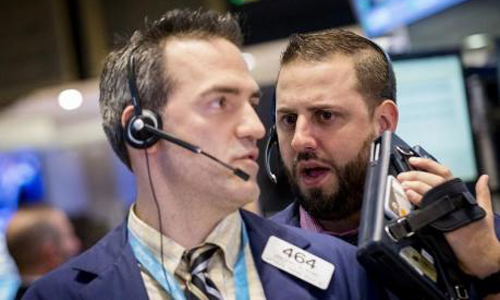 NEW YORK - US stocks fell on Tuesday as energy and healthcare shares retreated, but the S&P 500 and Nasdaq registered their ninth straight quarterly advance. The S&P's 500 quarterly winning streak was its longest since 1998, while the Nasdaq's was its longest ever. The Dow registered a slight loss for the quarter. During the session, all 10 S&P 500 sectors declined, with healthcare leading the way down. It dropped 1.5 percent, reversing strong gains from the previous day tied to deal activity. Energy shares also retreated, falling with crude oil. The S&P Energy index declined 0.9 percent, while shares of Exxon Mobil Corp fell 0.7 percent to $85. Oil was pressured as Iran and six world powers continued talks on a nuclear deal that could see the energy-rich country increase oil exports. Investors also were anxious ahead of March payrolls data on Friday, when the stock market is closed for the Good Friday holiday. If the report is strong, investors could view the US Federal Reserve as more likely to raise rates earlier than currently expected. The dollar added to its sharp gains for the quarter, stoking worries about earnings for US multinationals. S&P 500 earnings are expected to have declined by 2.8 percent in the first quarter from a year ago, Thomson Reuters data showed. "Today's price action is a reflection of all the bad in the quarter - the stronger dollar, weaker oil - and in some respects just a snapback from yesterday's outsized gains," said John Canally, chief economic strategist for LPL Financial in Boston. "Tomorrow's a new quarter and there's a new batch of people ready to take some risks, so I wouldn't be surprised if we see an up day." The Dow Jones industrial average fell 200.19 points, or 1.11 percent, to 17,776.12, the S&P 500 lost 18.35 points, or 0.88 percent, to 2,067.89 and the Nasdaq Composite dropped 46.56 points, or 0.94 percent, to 4,900.88. The day's decline in stocks followed gains of more than 1 percent on each of the major indexes on Monday. The S&P 500 remains down 2.3 percent from its March 2 record high close. All three indexes also posted losses for the month, with the Dow down 2 percent, S&P 500 down 1.7 percent and the Nasdaq down 1.3 percent. For the first quarter, the Dow declined 0.3 percent, the S&P 500 gained 0.4 percent and the Nasdaq gained 3.5 percent. On the deal front, Charter Communications Inc agreed to acquire Bright House Networks in a roughly $10 billion deal. Charter rose 5.3 percent to $193.11. NYSE decliners outnumbered advancers 1,794 to 1,247,; on the Nasdaq, 1,649 issues fell and 1,090 advanced. The S&P 500 posted 22 new 52-week highs and 2 new lows; the Nasdaq Composite recorded 72 new highs and 42 new lows. About 6.3 billion shares changed hands on US exchanges, below the 6.7 billion daily March average, according to BATS Global Markets.