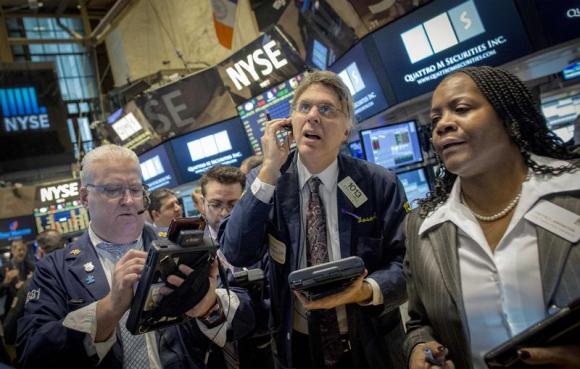 (Reuters) - The S&P 500 and Nasdaq ended lower on Wednesday, snapping a two-day rally as energy shares slid with oil prices and as investors' anxiety about the euro zone returned in the closing minutes of trading. The benchmark index added to losses late in the session after the European Central Bank abruptly cancelled its acceptance of Greek bonds in return for funding. The move means the Greek central bank will have to provide its banks with tens of billions of euros of additional emergency liquidity in coming weeks. "It's kind of reconfirming what we've thought for a while, which is that there is going to be a liquidity crunch if they don't resolve this Greek situation," said Larry Peruzzi, senior equity trader at Cabrera Capital Markets Inc in Boston. "They make a little bit of progress and then they kind of fall back." Shares of the Global X FTSE Greece 20 exchange-traded fund (GREK.P) dropped 10.4 percent, with volume spiking late in the session. The euro EUR= also fell on the news, while the S&P financial index .SPSY turned lower and ended down 0.3 percent. The Dow ended in positive territory, lifted by shares of Walt Disney (DIS.N), up 8 percent to $101.64 after quarterly profit topped analysts' expectations. The S&P 500 energy index .SPNY was off 1.6 percent as oil prices declined after a four-day surge of nearly 20 percent. U.S. crude CLc1 sank 8.7 percent to settle at $48.45 following a new build in U.S. crude stockpiles. The Dow Jones industrial average .DJI rose 6.62 points, or 0.04 percent, to 17,673.02, the S&P 500 .SPX lost 8.52 points, or 0.42 percent, to 2,041.51 and the Nasdaq Composite .IXIC dropped 11.04 points, or 0.23 percent, to 4,716.70. The day's dip followed a two-day gain of 2.8 percent for the S&P 500, driven largely by the rebound in energy shares. Big biotechnology names declined. Leading them lower was Gilead Sciences (GILD.O), whose stock dropped 8.2 percent to $98.43, a day after the drugmaker said it is offering steeper-than-expected discounts on its hepatitis C drugs. The news fueled concerns the sector would face increasing price pressure. The Nasdaq Biotech Index .NBI was down 1.8 percent. Gilead was also the biggest drag on the S&P 500 and Nasdaq. About 7.8 billion shares changed hands on U.S. exchanges, below the 8.1 billion average for the last five sessions, according to BATS Global Markets. Declining issues outnumbered advancing ones on the NYSE by 1,993 to 1,079, for a 1.85-to-1 ratio; on the Nasdaq, 1,677 issues fell and 1,054 advanced for a 1.59-to-1 ratio. The S&P 500 was posting 37 new 52-week highs and 3 lows; the Nasdaq Composite was recording 79 new highs and 34 lows.