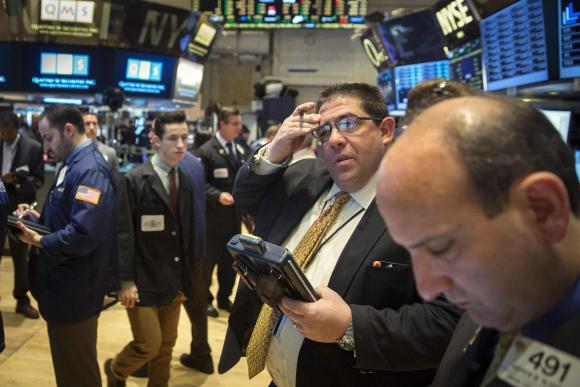 (Reuters) - U.S. stocks edged higher at the open on Friday, with the S&P 500 within striking distance of its intraday record, buoyed by upbeat German growth data and ahead of a reading on U.S. consumer sentiment. Germany grew 0.7 percent in the fourth quarter, more than double the expected 0.3 percent, pointing to a stronger 2015 for the region's biggest economy. "We actually had some better economic news out of the euro zone, obviously it all came from the strength in Germany, but nevertheless it was better," said Peter Cardillo, chief market economist at Rockwell Global Capital in New York. U.S. import prices tumbled 2.8 percent in January, the largest decline since December 2008 and the seventh straight month of declines. The preliminary University of Michigan's February reading on consumer sentiment is due at 10:00 a.m. Expectations call for a 98.1 reading. The Dow Jones industrial average .DJI rose 17.43 points, or 0.1 percent, to 17,989.81, theS&P 500 .SPX gained 2.42 points, or 0.12 percent, to 2,090.9 and the Nasdaq Composite.IXIC added 15.34 points, or 0.32 percent, to 4,872.95. Equities rallied Thursday after a ceasefire agreement between Ukraine and Russia, with strong gains in technology shares pushing the Nasdaq to a 15-year high. The S&P 500 closed at 2,088.49, just shy of its 2,090.57 record on Dec. 29. For the week, the Dow .DJI is up 0.8 percent, the S&P 500 .SPX is up 1.6 percent and theNasdaq .IXIC is up 2.4 percent. Investors have also been encouraged by signs of progress in Greek debt negotiations. A Greek government spokesman said the country will make every effort to reach a deal at Monday's meeting of euro zone finance ministers on how to transition to a new support program. "The big factor in the market is that hopes are building that we are probably looking at some agreement between the euro group and Greece, possibly as early as Monday," said Cardillo. U.S.-listed shares of National Bank of Greece (NBG.N) climbed 10.5 percent to $1.58. J.M. Smucker Co (SJM.N) reported a 3.5 percent drop in quarterly profit and said it expected a modest decrease in net sales in the current quarter. Its shares lost were up 3 cents at $112.47. Kraft Foods (KRFT.O) lost 3.9 percent to $63.60 as the biggest drag on the S&P 500 after the company posted quarterly results and said its chief financial officer would leave her role and two other senior executives would depart from the company. Of the 391 S&P 500 companies that have reported earnings, about 71.1 percent have topped profit expectations, according to Thomson Reuters data, while 57.5 percent have beaten on revenue. The earnings growth rate for the quarter is 6.6 percent, down from an 11.2 percent expectation on Oct. 1, but up from 4.2 percent expected on Jan. 1. Advancing issues outnumbered declining ones on the NYSE by 1,705 to 967, for a 1.76-to-1 ratio on the upside; on the Nasdaq, 1,429 issues rose and 710 fell for a 2.01-to-1 ratio favoring advancers. The benchmark S&P 500 index posted 46 new 52-week highs and no new lows; the NasdaqComposite recorded 52 new highs and 8 new lows.