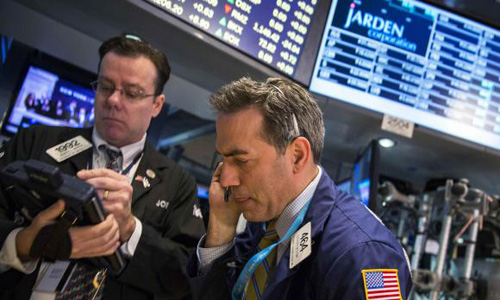 NEW YORK (Reuters) - The S&P 500 posted its best monthly gain since October 2011 on Friday, but U.S. stocks ended lower for the day as U.S. economic growth slowed more sharply than initially thought in the fourth quarter. The S&P 500 gained 5.5 percent for the month, while the Nasdaq rose 7.1 percent, its best monthly performance since January 2012. The strong gains have pushed the Nasdaq within striking distance of the 5,000 mark and record highs set in March 2000. A separate economic report showed a gauge of business activity in the U.S. Midwest dropped to its lowest reading since July 2009 in February. "We started off with the GDP report which was a bit underwhelming. That maybe set a tone for the market that it wasn't wildly ebullient," said Mark Luschini, chief investment strategist at Janney Montgomery Scott in Philadelphia. Apple (AAPL.O), down 1.5 percent at $128.46, weighed on both the S&P 500 and Nasdaq. Investors may have been taking profits ahead of Apple's expected unveiling of its smartwatch on March 9, said Kim Forrest, senior equity research analyst, Fort Pitt Capital Group in Pittsburgh. Among other decliners, J.C. Penney (JCP.N) dropped 6.8 percent to $8.50 after the retailer posted a surprise quarterly loss and forecast small margin improvements this year. The Dow Jones industrial average .DJI fell 81.72 points, or 0.45 percent, to 18,132.7, the S&P 500 .SPX lost 6.24 points, or 0.3 percent, to 2,104.5 and the Nasdaq Composite .IXIC dropped 24.36 points, or 0.49 percent, to 4,963.53. After a sluggish start to the year, stocks rebounded sharply in February. The Dow rose 5.6 percent in the month, its best monthly performance since January 2013. Shares of Monster Beverage (MNST.O) jumped 13.1 percent to $141.12, the biggest percentage gainer in the S&P 500 and Nasdaq. Thomson Reuters data shows S&P 500 earnings increased 6.8 percent in the fourth quarter, above expectations at the start of this quarter. Bank of America (BAC.N) shares lost 1.4 percent to $15.81. The company said two members of its board of directors and its chief accounting officer will be leaving the company in coming weeks. UBS also cut its rating on the stock to "neutral," from "buy." Volume was again low. About 6.5 billion shares changed hands on U.S. exchanges, below the 6.8 billion average for the month, according to BATS Global Markets. Advancing issues outnumbered declining ones on the NYSE by 1,567 to 1,485, for a 1.06-to-1 ratio; on the Nasdaq, 1,694 issues fell and 1,048 advanced, for a 1.62-to-1 ratio favoring decliners. The S&P 500 posted 26 new 52-week highs and 2 new lows; the Nasdaq Composite recorded 93 new highs and 27 new lows.