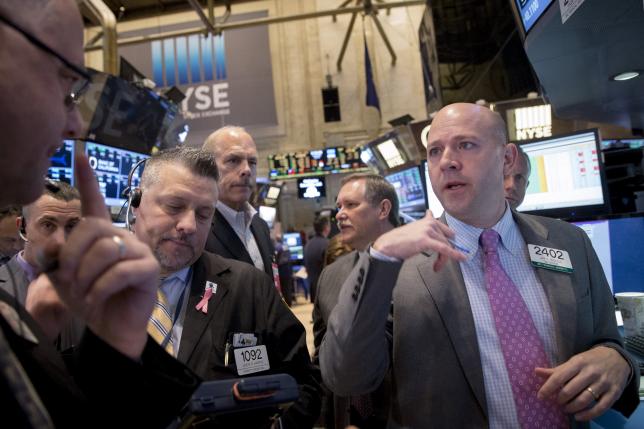 NEW YORK - The S&P 500 posted its biggest percentage loss since March 25 on Friday as investors shunned risk amid new trading regulations in China, renewed worries about Greece running out of money, and tepid US corporate earnings. Selling followed sharp overseas stocks declines and was broad, with all 10 major S&P 500sectors losing ground. Among the biggest drags, the S&P financials index was down 1.3 percent, with shares of Dow component American Express falling 4.4 percent to $77.32 after revenue missed analysts' estimates, partly due to the currency impact. The Dow and S&P 500 both snapped two weeks of gains. For the week, the Dow was down 1.3 percent, the S&P 500 down 1 percent and the Nasdaq down 1.3 percent. Both Honeywell International and General Electric blamed the strong dollar for lower revenue. Shares of Honeywell were down 2.1 percent at $101.70, while GE shares were down 0.1 percent at $27.25. China's securities regulator warned investors to be cautious as Chinese shares hit seven-year highs. China allowed fund managers to lend stocks for short-selling and expanded the number of stocks investors can short. China H-Share index futures fell 3.4 percent. Global equities lost ground as the weakness in China carried through to European and US markets. "We saw selling overseas, and that spilled over into the US We've had a nice rally over the last few weeks to the upper half of the trading range, and it's moving back over," said Adam Sarhan, chief executive of Sarhan Capital in New York. "It's still too early to tell what earnings are going to be for the quarter, but there haven't been that many upside surprises. And that's what we need to see." The Dow Jones industrial average fell 279.47 points, or 1.54 percent, to 17,826.3, the S&P 500 lost 23.81 points, or 1.13 percent, to 2,081.18 and the Nasdaq Composite dropped 75.98 points, or 1.52 percent, to 4,931.81. Market participants were also concerned Greece could leave the euro zone as it tries to reform its economy and deal with heavy debt. Greece dismissed reports it needed to tap remaining cash reserves to meet salary payments. The US earnings season has been mixed so far with more companies beating lowered expectations. The impact of the stronger dollar will be highlighted next week with quarterly reports from United Technologies Corp, Boeing and other top companies. Declining issues outnumbered advancing ones on the NYSE by 2,458 to 596, for a 4.12-to-1 ratio; on the Nasdaq, 2,160 issues fell and 597 advanced, for a 3.62-to-1 ratio. The S&P 500 posted two new 52-week highs and one new low; the Nasdaq Composite recorded 37 new highs and 43 new lows. About 7.1 billion shares changed hands on US exchanges, above the 6.2 billion daily average for the month to date, according to BATS Global Markets. - Reuters