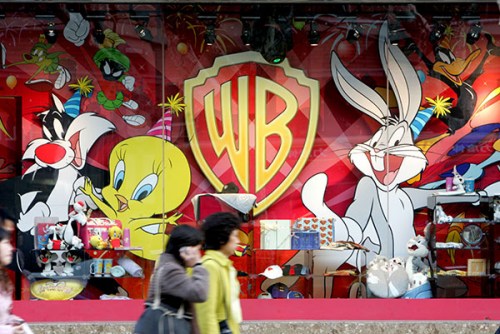 HONG KONG - Warner Brothers and investment firm China Media Capital (CMC) are forming a joint venture to develop Chinese-language movies, adding to a wave of tie-ups between Hollywood studios and Chinese partners to tap China's fast-growing box office. The joint venture, Flagship Entertainment Group Ltd, is being launched ahead of Chinese President Xi Jinping's official visit to the United States next week and underscores the growing influence of Chinese movies around the world. China's box office takings, set to hit $8.9 billion in 2019 from $5 billion this year, according to PwC, are fast catching up with the United States, but global studios have a tough time keeping on the right side of the censors and getting around a strict quota system for imported films. "The subtext is all these studios are looking at how they can get better access to the China market," said Ben Cavender, Shanghai-based principal of China Market Research Group, adding it also opened up channels to Chinese facilities and funding. Studios such as Paramount Pictures, DreamWorks Animation SKG Inc, Lions Gate Entertainment Corp and Walt Disney Co have all hooked up with local groups. Films that qualify as co-productions and meet various criteria are exempt from China's current quota of 34 imported films each year, and have an easier time navigating censorship issues with notoriously picky industry watchdogs. "The country's incredibly rich history and culture provide a huge trove of great stories, and we want to help tell those stories for new generations of filmgoers, in China and around the world," Kevin Tsujihara, chairman and chief executive of Warner Bros, said in a statement announcing the venture. Warner Bros is part of Time Warner Inc. THE CHINA ATTRACTION For Hollywood studios, the allure of the Chinese box office has become increasingly difficult to resist, which has at times led to concerns about self-censorship to gain access to the market. While box office receipts in the United States and Canada combined fell 5 percent last year to $10.4 billion, box office receipts in China jumped around a third to $4.8 billion, according to the Motion Picture Association of America Inc. China is on course to set a new record this year with box office receipts having already overtaken last year's total. Warner and CMC said the Chinese box office could surpass $10 billion annually in the next four years. A boom of online platforms is also driving a home video market for digital content. "With the proliferation of platforms available to consumers, premium content is more valuable than ever," CMC founder and Chairman Ruigang Li said, adding the deal would mix Warner Bros' storytelling expertise with CMC's on-the-ground savvy. Hollywood movies typically top China's box office charts, but local films are gaining strength. Part-animation "Monster Hunt" recently toppled Hollywood blockbuster "Furious 7" as the country's biggest-ever grossing film. Flagship will be owned 51 percent by CMC and 49 percent by Warner Bros. Hong Kong broadcaster TVB, as part of the CMC-led consortium, will have a 10 percent stake in the venture. The JV plans to develop and produce films for distribution throughout China and around the world, utilising Warner Bros' global film distribution network. The first titles could be released as early as 2016. Raine Group was a financial adviser to Warner Bros on the deal. -Reuters