ADELAIDE (AFP) – David Warner and Marnus Labuschagne steered Australia to 70 for one in the opening session of the day-night second Test against Pakistan in Adelaide Friday, justifying skipper Tim Paine’s decision to bat first. On an overcast afternoon and with the floodlights on from the first ball, Warner was not out 45 and Labuschagne on 18 in ominous signs for the visitors, after the pair both made centuries in the first Test in Brisbane. Pakistan need to win to square the two-match series, but the odds are heavily stacked against them, having lost 13 consecutive Tests in Australia. Over the years, taking wickets in Australia has been a challenge for Pakistan and they shuffled their bowling attack for the pink-ball Test. Veteran seamer Mohammad Abbas, who tormented Australia when he took 17 wickets in two Tests in the UAE last October, returned in place of Imran Khan while 16-year-old pace sensation Naseem Shah was rested. That meant a debut for 19-year-old medium-fast right-armer Muhammad Musa, but it was Shaheen Afridi who stood out and gave Pakistan early hope by snaring Joe Burns. With the ball moving off the seam, the opener got an edge to Mohammad Rizwan behind the stumps and was out for four. That only brought Labuschagne to the crease. He made 185 in the first Test and Warner 154, with the pair putting their heads down to grind out runs, picking off loose balls to keep the scoreboard ticking over. Warner smacked eight fours, with Musa mostly on the receiving end, as he neared a 31st Test half-century. But the economical Afridi made it tough going, getting the ball to swing and seam before the teams left the field five minutes early due to drizzle. 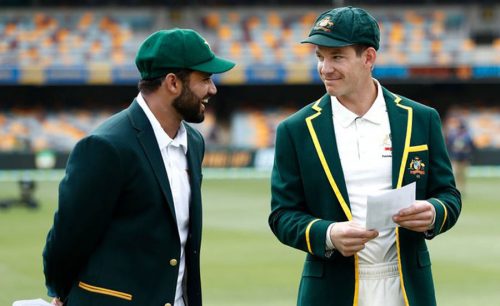 Earlier, Australia captain Tim Paine won the toss and elected to bat in the day/night second Test against Pakistan at Adelaide Oval. After going down by an innings and five runs in the series opener, Pakistan would hope to rediscover the winning touch in the day/night affair against Australia at the Adelaide Oval starting on Friday. Having played five day/night Tests so far, one each against New Zealand, South Africa, Pakistan, England, and Sri Lanka, Australia are the most experienced side in pink-ball cricket. They have emerged victorious in each of those five Tests at home and would hope to keep their unbeaten streak intact when they face Pakistan in such a contest for the second time, in Adelaide. The pink ball is known to assist pacers, and in the past, the Australian fast bowlers have proved this fact with conviction. With 26 scalps to his name, Mitchell Starc is the most successful bowler with the pink cherry, followed by Josh Hazlewood with 21 wickets. However, among the top five wicket-takers with the pink ball are two world-class bowlers: Pakistan’s Yasir Shah (18) and Australia’s Nathan Lyon (17), who prove that even the spinners have a vital role to play in day/night contests. The two experienced spinners are most likely to feature in the Adelaide Test, and would make for an engaging battle. Australia were dominant with both bat and ball in the Gabba Test, and would look to repeat their collective performance in the next game. As for Pakistan, it would be interesting to see how their young pace attack fares with the pink ball. They need improvement in their batting department. Asad Shafiq, Babar Azam, and Mohammad Rizwan were the only batsmen from the Pakistan side to make fifty-plus scores. Their skipper Azhar Ali, who only made 39 and 5 in the previous Test, could play a key role. His performances against the pink-ball have been impressive; he is the highest run-getter with 456 runs, including a brilliant 302*, while Steve Smith is second on the list with 405 runs. Playing XI Australia: Joe Burns, David Warner, Marnus Labuschagne, Steve Smith, Travis Head, Matthew Wade, Tim Paine (capt), Pat Cummins, Mitchell Starc, Nathan Lyon, Josh Hazlewood Pakistan: Shan Masood, Imam-ul-Haq, Azhar Ali (capt), Asad Shafiq, Babar Azam, Iftikhar Ahmed, Mohammad Rizwan, Yasir Shah, Shaheen Afridi, Muhammad Musa, Mohammad Abbas