Warner walked off field in club game after being 'abused': wife 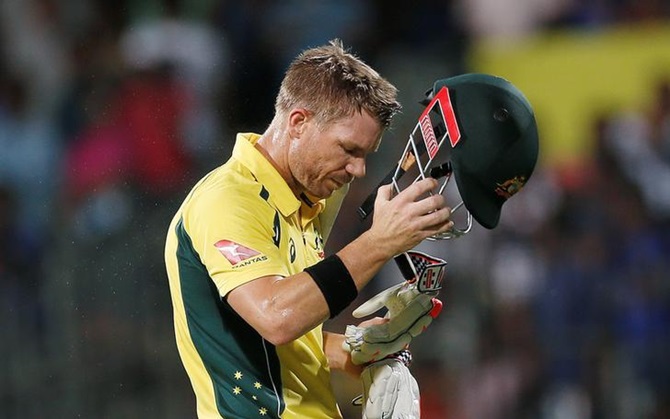 Warner walked off field in club game after being 'abused': wife

SYDNEY (Reuters) - The wife of banned cricketer David Warner has confirmed he walked off the field while batting in a Sydney club game after he was sledged by the brother of his dead former team mate Phillip Hughes. Warner, who is serving a 12-month ban from first class and international cricket for his role in a ball-tampering scandal, returned to the crease after a short break and then scored 157 not out for his Randwick-Petersham club. “David was taken aback by the comments and decided they went a little bit too far so he decided to remove himself from the game,” former professional ironwoman Candice Warner said on Channel Nine TV on Sunday. “Everyone has their opinion but I think there is a difference between sledging and abuse. What was said yesterday went too far. “It’s just a shame that this is taking from his great knock yesterday, he got 157 and he got a century a few rounds ago and he’s really enjoying playing for Randwick.” The match against Western Suburbs at Pratten Park was held up for about two minutes when Warner left the field but he returned to resume his innings by agreement with the opposition. Opener Warner was on 35 when he walked off and returned to complete a century off 179 balls before going on to make an unbeaten 157 with 12 fours and two sixes. The Western Suburbs team included Jason Hughes, whose Test playing brother was a team mate of Warner’s for Australia and New South Wales before his death as the result of being struck by a ball at Sydney Cricket Ground four years ago. Candice Warner confirmed that it was Hughes who directed the comments at her husband. Then Australia Test vice captain Warner was banned for 12 months along with his skipper Steve Smith by Cricket Australia in March for their part in the ball-tampering scandal during a Test series against South Africa. Warner, angered at apparent references to his wife’s previous relationship with another prominent sportsman, had already been involved in a series of incidents with South African players and fans before the scandal broke. For much of his international career, Warner was renowned for his own juvenile sledging and famously described as the “attack dog” of the Australia team. “David is very passionate and he is an aggressive player, that’s why he is one of the best players in the world in his position,” his wife added. “David will have to be careful when he gets back, but he won’t change his style of playing.”