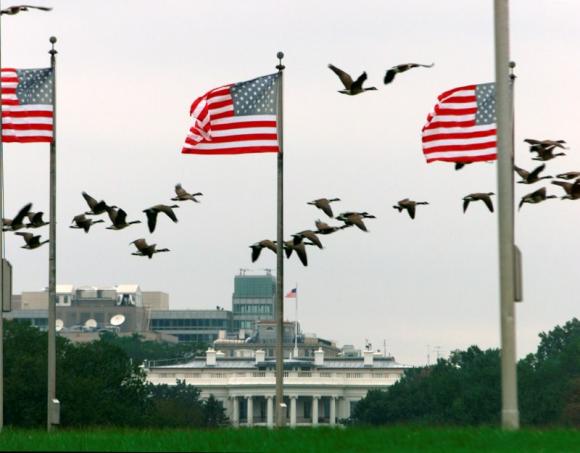 WASHINGTON - The US Park Service is weighing using dogs to drive off Canada geese that each foul the US capital's National Mall with up to three pounds (1.4 kg) of droppings a day, the agency said on Tuesday. The Park Service is considering using border collies to harass the large and growing population of Canada geese from tourist draws like the Lincoln Memorial Reflecting Pool, the Washington Monument grounds and John F. Kennedy Hockey Fields. With the dogs, "the geese will be encouraged to abandon the lawns and water in these areas and relocate elsewhere," it said in a statement. The geese, known as the Branta canadensis, produce up to two or three pounds (0.9 to 1.4 kg) of feces a day per bird. The droppings damage pumps and filters of the Reflecting Pool, degrade the park and are a potential public health hazard, the Park Service said in a statement. No birds will be physically harmed. The park-like Mall area stretches from the Capitol to the Potomac River and is lined by monuments and museums. The agency is accepting public comment through April 22, it said. The US Fish and Wildlife Service said that local populations of Canada geese were increasing rapidly throughout the lower 48 US states. "Many populations now (are) at levels where agricultural depredations and urban conflicts are common," it said on its website. The agency said it has tried to use increased hunting to deal with nuisance geese, but that can be impractical, especially in urban areas. Even as Canada geese that reside in the United States are booming, migratory populations of the same species, that nest in Arctic or sub-Arctic regions are stagnant or in decline, the Fish and Wildlife Service said. - Reuters