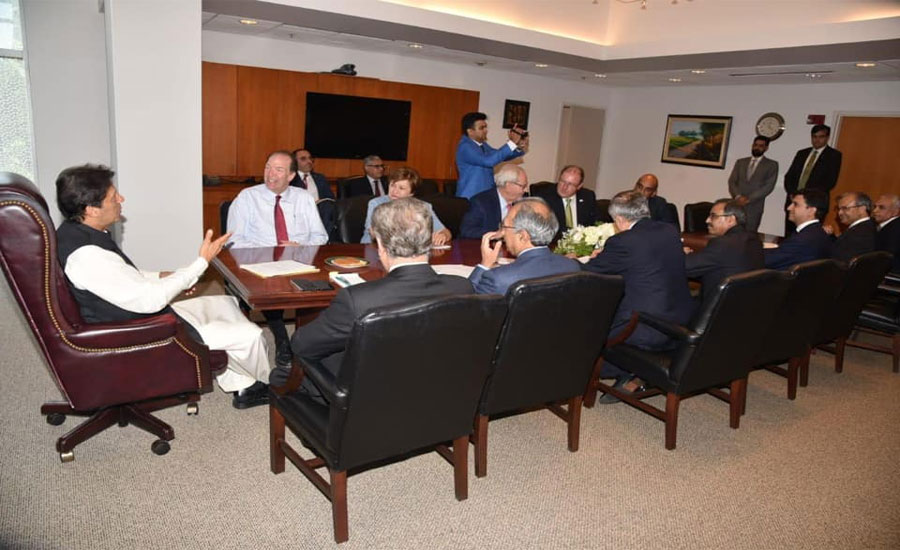 The WB's president and the IMF's acting managing director discussed with the premier the current economic situation of Pakistan and future cooperation with the global lenders.

A delegation of businessmen and investors held a meeting with Prime Minister Imran Khan at Pakistan Embassy. The delegation which included Zia Chishti, Muhammad Khaishgi and Hasnain Aslam took keen interest in investment in the IT and technology sectors. Businessmen Nasir Javed, Ashraf Qazi and Shoukat Dhanai also called on the premier and discussed investment opportunities in tourism and other sectors. Talking to the businessmen, Prime Minister Imran Khan highlighted investment-friendly environment in Pakistan as a result of steps being taken by the government for ease of doing business. He also informed the delegation about promotion of industrial sector and socio-economic development. The delegation appreciated the vision of the Prime Minister in connection with socio-economic development in Pakistan and expressed their interest to invest in education, manufacturing and steel sectors. A group of investors of health and food sectors also called on the Prime Minister. The delegation included Aslam Khan, Mubashir Chaudhary, Dr Javed and Dr Abid Shiekh.

They discussed issues relating to trade and investment in Pakistan.