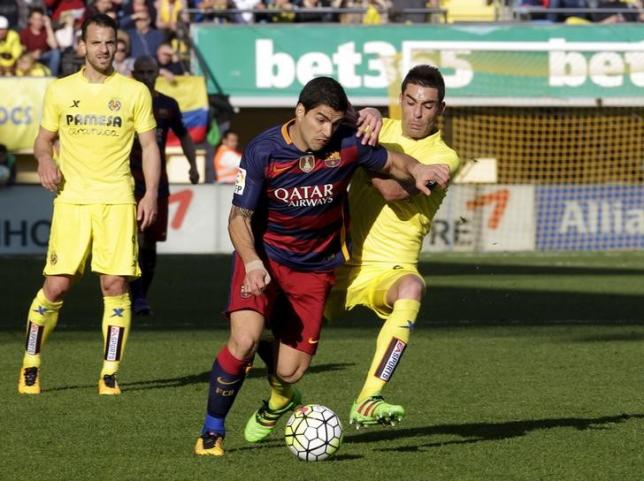 BARCELONA - Barcelona squandered the chance to go 11 points clear in La Liga after blowing a two-goal lead in the space of six minutes in a 2-2 draw at Villarreal that was overshadowed by a controversial penalty. A 62nd minute own goal by Barcelona substitute Jeremy Mathieu, who turned a corner into his own net, ended Barca's hopes of a 13th successive La Liga win after Villarreal striker Cedric Bakambu reduced the deficit. Ivan Rakitic gave Barca the lead after 20 minutes from close range and Neymar made it 2-0 in the 41st with a chipped penalty as goalkeeper Sergio Asenjo, who looked to have touched the ball before felling Neymar in the box, went the wrong way. Barcelona are nine points clear of nearest challengers Atletico Madrid, who suffered a shock 2-1 defeat at Sporting Gijon on Saturday. Third-placed Real Madrid beat Sevilla 4-0 to stand 10 points off the pace and one behind their city rivals. “It’s a positive day for us as we’re one point closer to our objective,” Barca coach Luis Enrique told a news conference. “Every point we gain on our rivals is fantastic.” Fourth-placed Villarreal had coach Marcelino dismissed from the dugout just after Rakitic’s goal when he protested at the referee’s decision not to give a second yellow card to Barcelona defender Gerard Pique following a handball. Referee Jose Maria Sanchez Martinez’s decision not to book Pique for the handball was controversial, as the defender would have been suspended for Barca’s next league game against arch rivals Real Madrid had he been dismissed. The official further enraged the home supporters before the break when he awarded the penalty when Asenjo appeared to reach the ball before sending Neymar over. POTENT TRIDENT Real Madrid's attacking trident of Karim Benzema, Gareth Bale and Cristiano Ronaldo were all on target in a 4-0 win over Sevilla that took Zinedine Zidane’s side within a point of second-placed Atletico Madrid. Bale converted from close range for the third and his 43rd league goal for Madrid, surpassing ex-Barca forward Gary Lineker to become the all-time top scoring British player in La Liga. Welshman Bale, who also hit the woodwork against Sevilla and had a goal wrongly ruled out for offside in the first half, needed 75 games to eclipse former England striker Lineker, who hit 42 goals in 103 games for Barcelona from 1986 to 1989. Benzema opened the scoring in the sixth minute with a brilliant half-volley while Keylor Navas preserved the lead by saving Kevin Gameiro’s penalty before the break, the third spot kick the Real goalkeeper has stopped this season. Ronaldo also missed a penalty -- for the third time this season -- in the second half before Gameiro had an effort harshly ruled out for offside. Ronaldo pounced from close range after 64 minutes to wrap up the points and made a gesture of apology to the home fans, while Bale netted two minutes later and substitute Jese added a late fourth for a scoreline that somewhat flattered the home side. Celta Vigo moved into the top six after beating Valencia 2-0 thanks to late goals from John Guidetti and Hugo Mallo. The home fans turned their anger towards coach Gary Neville, chanting "Gary go now" after a third consecutive league defeat left the club 14th, six points above the relegation zone. The Galicians capitalised on Athletic Bilbao’s 2-1 defeat at Espanyol earlier on Sunday to move ahead of the Basques, who dropped to seventh. Javier Eraso’s first half goal put Ernesto Valverde’s men in charge but quick strikes from Pape Diop and substitute Felipe Caicedo in the second half turned the game in Espanyol's favour. They moved up to 12th, seven points above the drop zone. -Reuters