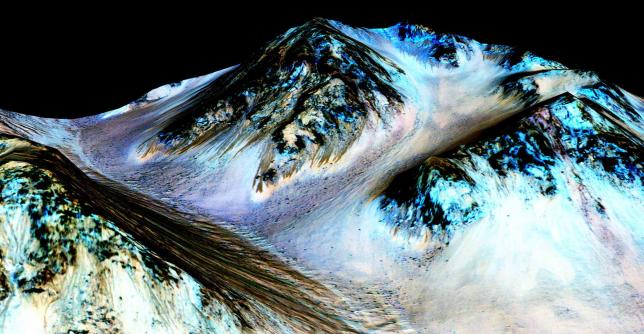 CAPE CANAVERAL, FLORIDA – Briny water flows during the summer months on Mars, raising the possibility that the planet long thought to be arid could support life today, scientists analyzing data from a NASA spacecraft said on Monday. Although the source and the chemistry of the water is unknown, the discovery will change scientists' thinking about whether the planet that is most like Earth in the solar system hosts microbial life beneath its radiation-blasted crust. "It suggests that it would be possible for life to be on Mars today," John Grunsfeld, NASA's associate administrator for science, told reporters, discussing the study published in the journal Nature Geoscience.
"Mars is not the dry, arid planet that we thought of in the past. Under certain circumstances, liquid water has been found on Mars," said Jim Green, the agency's director of planetary science.
But NASA will not be rushing out to search the newly discovered saltwater residue for life just yet. "If I were a microbe on Mars, I would probably not live near one of these (sites). I would want to live further north or south, quite far under the surface and where there's more of a freshwater glacier. We only suspect those places exist and we have some scientific evidence that they do," Grunsfeld said. The discovery of the water flows was made when scientists developed a new technique to analyze chemical maps of the surface of Mars obtained by NASA's Mars Reconnaissance Orbiter spacecraft. They found telltale fingerprints of salts that form only in the presence of water in narrow channels cut into cliff walls throughout the planet's equatorial region. The slopes, first reported in 2011, appear during the warm summer months on Mars, then vanish when the temperatures drop. The chemical fingerprints of hydrated minerals did likewise, the new study showed. Scientists suspected the streaks, known as recurring slope lineae, or RSL, were cut by flowing water, but previously had been unable to make the measurements. "I thought there was no hope," Lujendra Ojha, a graduate student at Georgia Institute of Technology and lead author of the scientific paper, told Reuters. Mars Reconnaissance Orbiter makes its measurements during the hottest part of the Martian day, so scientists believed any traces of water, or fingerprints from hydrated minerals, would have evaporated. Also, the chemical-sensing instrument on the orbiting spacecraft cannot home in on details as small as the narrow streaks, which typically are less than 16 feet (5 meters) wide. But Ojha and colleagues created a computer program that could scrutinize individual pixels. That data was then correlated with high-resolution images of the streaks. Scientists concentrated on the widest streaks and came up with a 100 percent match between their locations and detections of hydrated salts. The discovery "confirms that water is playing a role in these features," said planetary scientist Alfred McEwen, with the University of Arizona. FROM WATER TO SUPPORTING LIFE? Still unknown is whether minerals are absorbing water vapor directly from Mars' thin atmosphere, or if there is a source of melting ice beneath the surface. Whatever the water's source, the prospect of liquid water, even seasonally, raises the intriguing prospect that Mars, which is presumed to be a cold and dead planet, could support life today. However, McEwen said much more information about the water's chemistry would be needed before scientists could make that assessment. "It's not necessarily habitable just because it's water – at least to terrestrial organisms," he said. The evidence that there was water on the planet as recently as last summer and during several previous seasons was the key finding in the study released on Monday. NASA's ongoing Mars rover Curiosity has already found evidence that Mars had all the ingredients and suitable habitats for microbial life to exist at some point in its past. Scientists have been trying to figure out how Mars transformed from a warm, wet and likely Earth-like planet early in its history into the cold, dry desert that exists today. Billions of years ago, Mars, which lacks a protective, global magnetic field, lost much of its atmosphere. Several initiatives are under way to determine how much of the planet’s water was stripped away and how much remains locked in ice in underground reservoirs. –Reuters